A unique innovator: ARI’s Markus Windolf to leave the AO at the end of 2022 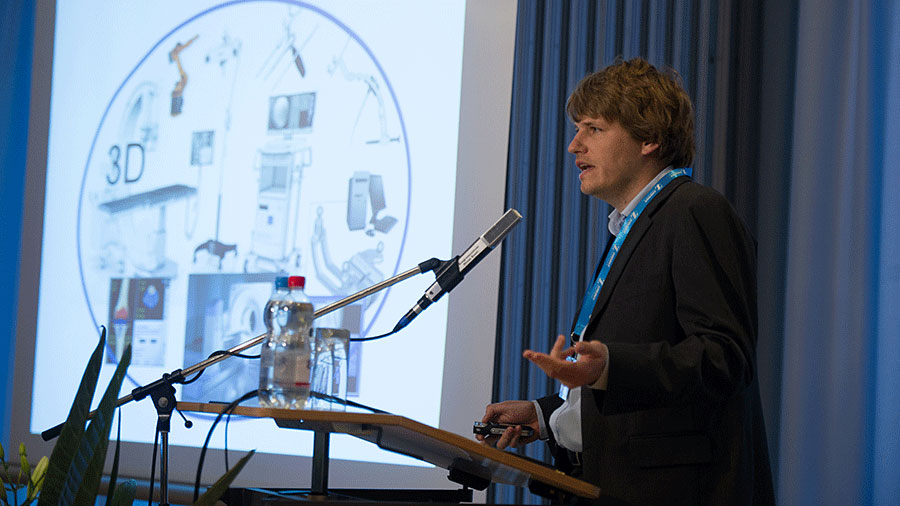 After a rich and highly productive 18-year career with the AO Research Institute Davos (ARI), acclaimed innovator Markus Windolf, PhD, will leave the organization at the end of 2022 to launch a start-up.

Windolf currently serves as deputy leader of ARI’s Biomedical Development Program and leader of its Focus Area Concept Development. He studied in India and Thailand before earning his mechanical engineering degree (Dipl-Ing) from Technical University Hamburg-Harburg, Germany. He joined ARI in November 2004—the first step in a career that would see him become the inventor of 16 international patent families, author of 100-plus peer-reviewed papers and book chapters, and leader of a variety of cutting-edge preclinical research projects on bone healing and fracture fixation.

Across the past 18 years, Windolf has flourished in ARI’s nourishing, world-class research environment. He has gone from biomechanical research to initiating and leading an impressive array of medical device development projects based on his inventions, including:

• The Autogauge smart drilling device, which was—together with Xin1—handed over to Depuy        Synthes (DPS) three years ago; the next step for DPS is to launch the highly awaited medical product based on these technologies and the prototype ARI developed

ARI Director Prof Geoff Richards said those projects represent just a few of Windolf’s contributions to the AO mission of promoting excellence in patient care and outcomes in trauma and musculoskeletal disorders.

"Markus is an enthusiastic engineer and inventor who wishes to see his ideas come to life to help patient care," Richards remarked. "He is passionate about the valorization of his ideas and worked tirelessly over his time at ARI to enable this. He became an expert in developing procedures for taking a concept to a regulatory-approved medical device before we initiated our Technology Transfer team and the AO Innovation Translation Center."

“Markus has always strived to translate the gained outcomes and learnings into medical devices, such as the Biphasic Plate, to improve patient care,” Gueorguiev-Rüegg said. “He has new, outside-the-box ideas and an incredible focus on driving those ideas forward in service of surgeons and patients. He is unique in terms of his qualities as an innovator; it’s only by chance that you find someone with Markus’ distinctive qualities.”

In 2014–15, Windolf undertook a yearlong sabbatical of clinical immersion at Queensland University of Technology (QUT) in Brisbane, Australia, on the initiative of Prof Stephan Perren, Prof Michael Schütz, and Prof Richards—a creative environment that generated a variety of ideas to solve real-world clinical problems. In 2019, Windolf earned the AO Technical Commission’s Certificate of Merit in recognition of his outstanding contributions to innovation, and in October 2022 was named to Stanford University’s list of the world’s top 2 percent of scientists, putting him among the most-cited researchers in the world across all scientific fields. Since 2010, Windolf has been international faculty at the AO’s flagship annual event, the AO Davos Courses.

(Left to right) Markus Windolf and Boyko Gueorguiev-Rüegg
Part of the AO family
With just a few days remaining in his ARI tenure, Windolf has only praise for the institute that cultivated his professional growth and gave him an innovation platform.

“Most important, I think, is the interaction I’ve had with other scientific disciplines and, in particular, with surgeons from across the specialties. This is a unique aspect of the AO because as an engineer at a university or even in industry, I wouldn’t have had these close collaborations with surgeons—or have become friends with them,” he explained. “I am so grateful to have been part of the AO family but also to the ARI Concept Development team for all that we have achieved together.”

Additionally, Windolf was a superb mentor to his colleagues. Richards noted how Windolf "worked extremely well with his team in concept development to empower and mentor the team in these areas, and to enable them to develop their ideas and move toward leadership roles with projects and younger team members."

Windolf is humble when discussing his long list of accomplishments at ARI, a global leader in preclinical research for trauma surgery and orthopedics.

“I describe myself as interested in technology. In my mind, I'm not a researcher, per se. I have been a developer—a technician, somebody who develops solutions,” he said. “It was quite a surprise to me when I learned that I am among Stanford’s top 2 percent of scientists. My immediate response was, ‘What? Really? Come on, I am not a researcher. It was a great surprise and an honor, but my passion has always been development.”

“It has been absolutely amazing, my dream job, because I have had almost unlimited freedom to bring ideas to life. Generally, I have been able to create innovation from my own ideas and with my team developing these devices further and further,” said Windolf. “I'm curious how these ideas will mature in the future and whether they will finally fulfill the purpose of improving patient care and outcomes."

Staying connected to the AO
Windolf said his AO experience extends far beyond a “job.” The organization, he emphasizes, is “family.”

“I am part of the AO family, which is unique in the world and, importantly, has a purpose behind it. Very early on, I noticed Maurice Müller's "unity of spirit, purpose, and execution,” he said.

The AO is also where Windolf met his wife, Sophie Verrier, PhD, principal investigator in ARI’s Regenerative Orthopaedics Program. The couple and their two children have deep roots in Davos, where they’ll stay as Windolf launches his own company, a venture he calls the next logical step in his career.

“I have been following a path since I joined the AO, and the path now demands that I take
this next step outside of this fantastic organization to start my own business,” he said. “I hope to stay connected to the AO and the AO family for as long as possible—and I will probably still be working on the AO Fracture Monitor from an external position to help move that project forward."

“I am confident in Jan’s and Manuela’s ability to carry our focus area into the future. Jan is innovative and creative and at the same time structured—a combination you don’t often see. Together with Manuela's expertise and commitment for medical device development, this is a natural fit,” said Windolf.

"We will miss Markus," said Richards. "We wish him well in his future endeavors, and we look forward to opening up interactions with the AO through the AO Innovation Translation Center with Markus in the not-too-distant future."