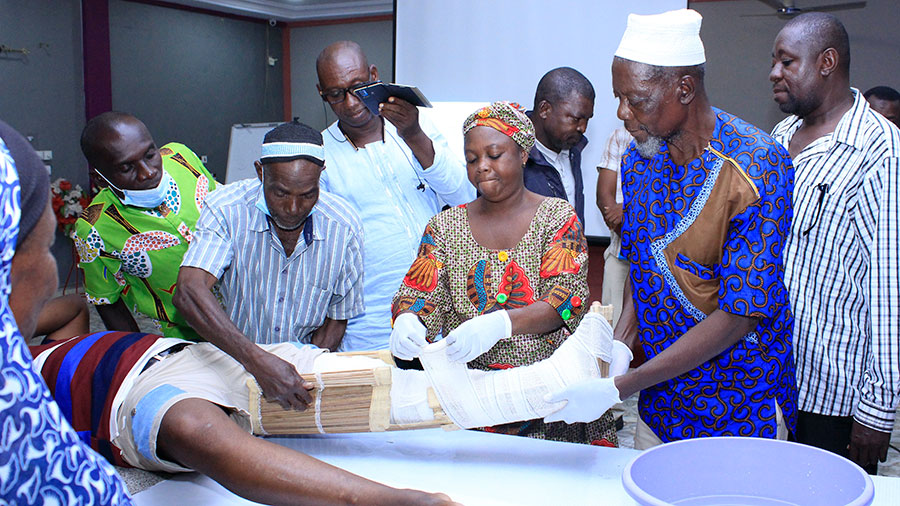 Traditional healers and bonesetters play a significant role in sub-Saharan Africa, as they are often the go-to primary healthcare providers in low-income countries and their remote rural areas. This is true especially in Ghana, where, in 2021, there were only 52 trauma and orthopedic surgeons for a population of over 30 million.

“The rate of traditional bonesetter-related limb gangrene, disability, infections, and death in Ghana is alarming, particularly among children,” said Dr Dominic Konadu-Yeboah, who serves as AO Alliance faculty and is head of trauma and orthopedics at Komfo Anokye Teaching Hospital (KATH) in Kumasi, Gha­na.

Under his leadership, AO Alliance launched the Traditional Bonesetter Training Program in Ghana in 2021 with support from the AO's Strategy Fund, with the goals of preventing complications from traditional bonesetter treatments and preventing lifelong disability though fracture care education.

Under Konadu-Yeboah’s supervision, AO Alliance mapped and recruited traditional bonesetters to participate in the program from three regions across the country: Ashanti, Northern, and Upper West. Since April 2021, six educational events were organized in these regions with a team of local surgeons and educators, attracting 197 bonesetters from the cities Kumasi, Tamale, and Wa.

In addition to following lectures by experienced trauma and orthopedic surgeons, small-group discussions, and practical exercises, visits to teaching hospitals were set up to expose bonesetters to appropriate nonoperative methods of fracture treatment. The practical exercises were specifically tailored for bonesetters and involved the use of local tools adapted to better meet modern clinical standards for stabilizing fractures.

Data from Tamale Teaching Hospital (TTH) and KATH reveal an increase in referrals from bonesetters to TTH for the period between April 2021 and April 2022, and a 57 percent decrease in bonesetter-related amputations since the training began.

The trainings were so well received by the bonesetters that they set up associations—one for each of the three regions—with the help of AO Alliance and its local partners at TTH and KATH. By June 2022, over 200 bonesetters joined the associations. When a bonesetter-related complication is recorded in the hospital, the project team informs association leaders, who then trace the responsible bonesetter, educate them on how to prevent such a complication, and then enroll them into the association.

“I decided to do this AO Alliance course to improve what I was doing. I learned a lot. I would like to thank AO Alliance for bringing this training to the bonesetters, and for the collaboration with the hospitals so that if there are complicated cases that we can’t treat, we refer them to the hospitals for further treatment,” said Yussif Abudu Babia, a bonesetter from Gwolu.

Yeboah’s abstract on the program, “Training Traditional Bonesetters in Basic Principles of Fracture Treatment: A Proof of Concept,” has been selected for an Orthopaedic Trauma Association (OTA) 2022 Humanitarian Scholarship Award.

Do you have an idea to potentially improve patient care or surgeon education?

AO's Innovation Funding can support you!