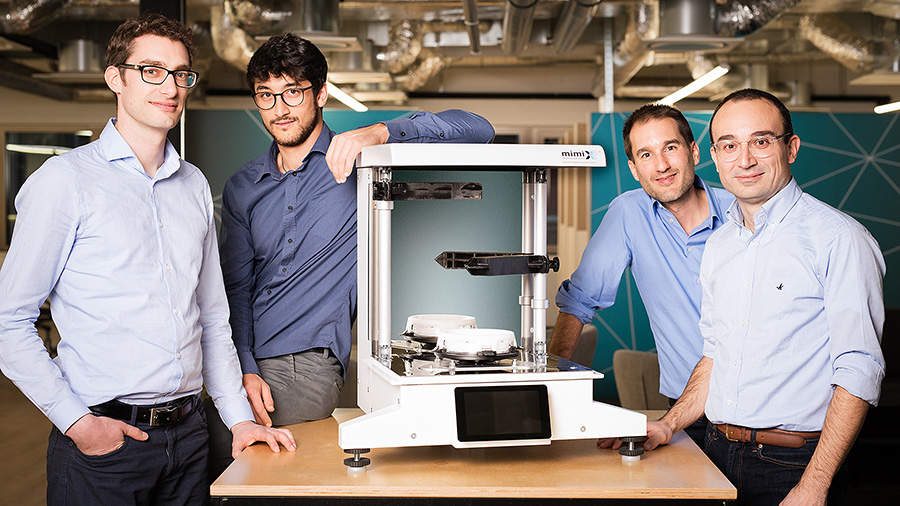 A new technology developed by an AO Research Institute Davos (ARI) research scientist is poised to revolutionize tissue engineering, thanks to support from the AO Innovation Translation Center's development incubator. Sound-Wave Induced Morphogenesis (3D SIM), the brainchild of ARI research scientist Tiziano Serra, PhD, uses sound waves to generate a network of cells in a matter of seconds, providing a self-assembled substrate for vascularization. This has potential to make tissue-engineered constructs based on autologous materials that are widely available in a laboratory environment.

AO resources—including funding and know-how—are provided by the Technology Transfer office at the AO Innovation Translation Center (AO ITC), which partners with inventors to achieve proof of concept (POC) and bring them to market.

Vascular tissue engineering (the generation of tissue that includes vessels) has the potential to significantly impact the treatment of a wide variety of medical conditions. It could provide in vitro-generated vascularized tissue and be useful for in vitro models for diagnostic and drug discovery indications. However, developing a large-scale, functional, vascularized construct is still a major challenge and an unsolved clinical problem.

“I began working on this concept when I came to ARI in October 2016. It started with a discussion with my supervisor about the possibilities of using sound to pattern cells and generate organs,” Serra said. He took his idea to BRIDGE, a joint program with the Swiss National Science Foundation and Innosuisse – Swiss Innovation Agency, and came away with CHF 180,000 in funding. “That was a first step toward producing a POC but for visibility and credibility, I really needed to demonstrate the technology.”

Serra explained that his 3D SIM technology resolves challenges (difficulties in rapid and mild recreation of the natural complex morphology of tissues and organs during surgery) presented by other promising tissue engineering technologies, such as 3D printing. The prototype equipment currently under development could, in less than a minute, generate large size cell patterned constructs (from few millimetres to 150 square centimetres) which will guide the formation of vascularized tissues—a real breakthrough. The technology can pattern cells and build tissue layer upon layer, meaning that it can be used to generate specially orchestrated tissue models for use in screening drugs, creating patient-specific tissue or disease models.

“Our process will allow the user, whether they are a scientist, pharma company, or a clinician in the operating room, to simply use a pipette to put cells into our labware, and then apply sound for a few seconds. This process will lead to the formation of this patterning of cells or micro fragments that can then be extracted by the clinician and used to treat the patient,” Serra explained. “In principle, this technology could be used to produce skin, bone, cartilage, even organs. It will be a world first and could revolutionize the way 3D organs and tissues are generated and the way of working in the operating room by offering a cost-efficient, point-of-care tissue engineering approach to regenerative, patient-tailored precision medicine.”

Human Umbilical Vein Endothelial Cells (HUVEC) patterned within fibrin gel in a circle shape in order to assemble a proto-vessel structure after 72h.

A startup company, mimiX Biotherapeutics, has been established, with Serra as chief scientific officer (CSO) and 3D bioprinting pioneer Marc Thurner as chief executive officer (CEO), to develop, manufacture, and bring to market equipment, biomaterial, and labware to be used with the 3D SIM technology. mimiX Biotherapeutics intends to bring 3D SIM to maturity and make it suitable for clinical application.

Support from the AO ITC is key to bringing 3D SIM technology to life, Serra said. In total, development incubator resources support the project through three phases of project, over approximately 18 months. It covers creation of an advanced functional prototype of the technology, investigation of biomaterials, and an in vivo vascularization study to prove functional integration of 3D SIM-manufactured tissues. Serra expects the first 3D SIM related products to be made available to laboratories in the first quarter of 2021.