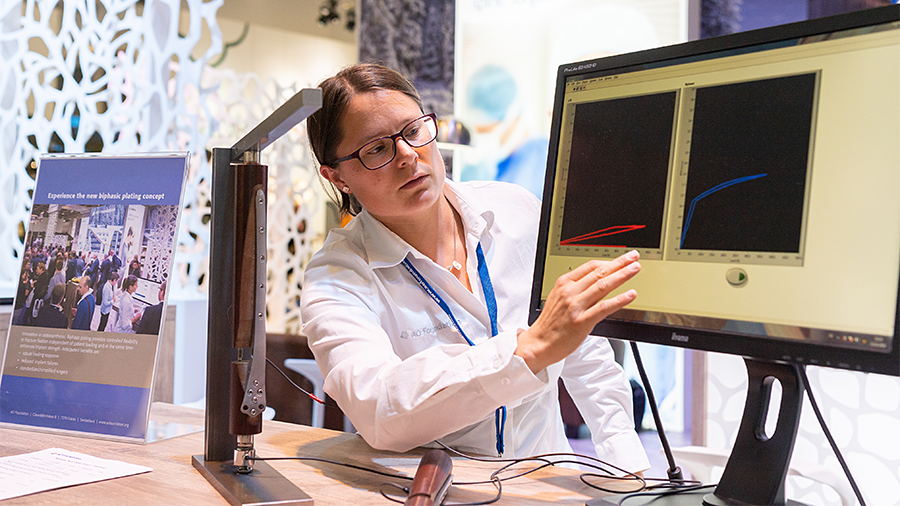 Ladina Hofmann-Fliri, who has spent her entire career at the AO Research Institute Davos (ARI), counts herself luckier than many: Her education and career trajectories have been smooth. She believes establishing diversity, inclusion, and mentorship firmly within the AO will lead to more diverse perspectives and solutions—to the ultimate benefit of patients.Hofmann-Fliri works in ARI’s Biomedical Development Program, which develops innovative concepts and implants for orthopedic applications and research. It’s a role she finds engaging and enriching due to the ever-changing array of projects to which she contributes. One example is the Biphasic Plate, which in 2021 earned a CE mark—the first time ever awarded to ARI for an implantable device.“I was assigned to this project in 2015, and it has been really interesting to be involved with it all the way from development research to documentation all the way up to the certification itself,” Hofmann-Fliri says. “The next step is clinical use with selected clinics and surgeons in Switzerland to begin with, and then we will be able to put it on the market in Europe. Throughout these 12 years at ARI, I have really loved the constant changes in what I was doing, starting with research for AO Trauma, then service work for an industrial partner, and who knows what comes next? Now that the Biphasic Plate is ready to go into clinics, I’m helping out with other projects in our group and I can apply what I’ve learned with the Biphasic Plate to these other projects.”A native of the small town of Scuol in Switzerland’s Engadine Valley, Hofmann-Fliri grew up in a family in which education was highly valued. She considers herself fortunate that her educational trajectory was smooth and that her parents had the resources to support her during her university years.“My path has been smooth. I had support from my family: My parents had to rent an apartment for me and pay my living expenses while I was in school in Zurich, and I never had money problems in that regard,” she explains. “Also, I was lucky that I never had trouble learning.”She also feels fortunate to a research career with the right amount of variety to keep it interesting, supportive colleagues, the legendary AO spirit of camaraderie, and nurturing mentors at ARI. She emphasizes that the AO itself has made it possible for her to establish a satisfying balance of work and family life.“Work/life balance is important. I have two children and after I had my first child, I knew that I didn’t want to work more than 50 percent while my children are small,” Hofmann-Fliri says. “I would never be able find a job doing what I do now and working 50 percent. The AO has allowed me to continue working on what I like while having a family; both are important to me.”As satisfied as she is with her work, Hofmann-Fliri also knows that there’s work to be done to level the playing field for underrepresented groups.

“In R&D, women are underrepresented, at least in our group. Biomedical development is traditionally a male-dominated discipline, mostly engineers. Also, during my studies, mechanical engineering was male-dominated,” she says. “Our group is quite small, with two women among the seven people in the core team, but if you count fellows and students, though, it’s a nice mix.”Hofmann-Fliri values the perspectives offered by her colleagues and partners.“I had the honor to work on some projects with a female surgeon, which is very rare still: An Sermon from Leuven, Belgium,” Hofmann-Fliri recalls. “She told me that it wasn’t so easy for her as a woman in her careers, due to the men laughing at her, saying things like, ‘How do you want to do hip surgery? You need to be strong.’ [But] she always managed to show what she can do.”Hofmann-Fliri has sometimes been shocked to hear similarly disrespectful comments made to subordinates, but she believes behaviors are changing as surgeons trained in part at ARI gradually take on leadership roles and become role models themselves.“I think one thing contributing to the change is the fellowship program ARI Director Geoff Richards set up years ago. The fellows had a good example of how to treat people with respect,” she adds.As the mother of two young children, Hofmann-Fliri knows all too well the value of role models and mentors.“I see as a parent how we can influence others by how we behave and how we treat people, and how we live our lives, how we see life, how we handle problems, and how these influence our perspectives,” she says.

“We need to stop putting people into boxes. Don’t automatically attribute people’s behavior to the way they’re different from you. ”

“I catch myself doing that sometimes, too, and I have to stop myself. Here’s an example: My son is six years old and pink was his favorite color for a long time but in the back of my head, I thought maybe he would be bullied. I try to tell my kids: Whatever they want to do is perfectly fine. There are no boy or girl colors, toys, or activities; colors, toys, and activities are for everyone and they don’t belong to any one group. Maybe this is also why my daughter is not the typical princess and she doesn’t go for the so-called ‘girly’ stuff.”Hofmann-Fliri sees the AO Access initiative—with its vision of changing the AO to “be a diverse and inclusive organization with equitable access, and opportunity for advancement within the AO organization at all levels, regions, clinical divisions, unit, and initiatives”—as a necessary step in the right direction.“I think the AO Access initiative—I love the idea behind it—is already a good thing, encouraging underrepresented groups to be part of it,” she says. “I do think the AO already does a lot in this regard, with members and fellows from all around the world.”Patients are the ultimate beneficiaries of the AO’s effort to embed diversity, inclusion, and mentorship throughout its ranks, Hofmann-Fliri says.“Patients can be anyone. They are not one gender, race, or age. A diverse group of health care professionals can bring a wider variety of perspectives, which leads to a wider variety of solutions, and patients ultimately benefit from these solutions,” she adds.
﻿
X
Cookies help us improve your website experience.
By using our website, you agree to our use of cookies.
Confirm