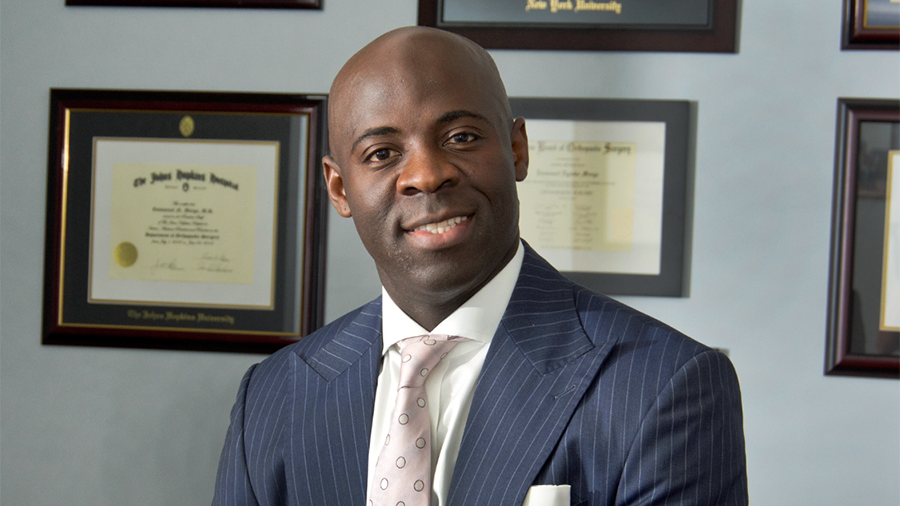 Growing up in the Central African nation of Cameroon, University of Rochester School of Medicine and Dentistry spinal and scoliosis surgeon Emmanuel Menga says everyone looked like him and it never occurred to him to measure others’ achievements by skin color. But as a Black orthopedic surgeon practicing in the United States, he is all too aware that he and others from groups underrepresented in medicine are sometimes judged in that way. He is helping to change that by calling out bias when he sees it, mentoring young people, and serving as a member of the AO Access faculty development and leader development task force.

“I think I was impressed that they were speaking a language I’d never heard before and on top of that, these doctors were taking care of me,” he recalls, adding that his parents have been his greatest role models and that he has been positively influenced by the autobiography of African American neurosurgeon Dr Ben Carson, as well as his own older sister becoming a physician.

“My motivation every day to wake up and keep going is that I remain passionate about why I wanted to do medicine. I grew up in Cameroon where every kid gets malaria; we all get sick at some point, and I have maintained my passion about wanting to help people and to make a difference,” he says. “It’s very gratifying to improve patients’ quality of life and their function and to relieve their pain. The great thing about medicine is that we are learning every day.”

As satisfying as a career in surgery can be, Menga says there are always opportunities to learn and improve—and that includes addressing inequalities to entry and advancement, and to identifying and overcoming barriers, as demonstrated by the AO’s commitment through AO Access.

“In orthopedics in general, recent articles show that African Americans make up less than 3 percent of orthopedic surgeons in the United States. There’s also a significant lack of representation of females in orthopedics,” he explains. “In my subspecialty, spinal surgery, it has to be even more significant.”

Beyond those statistics are real-life challenges.

“I’ve walked into a patient’s room in the hospital and they were surprised to see that I’m a Black male taking care of them or thought that I was the janitor coming to clean the room…or walked in to see a patient along with my residents who happened to be white males and the patient ignored me and was talking to a resident about the final decision regarding their care, not knowing that I was the one in charge,” says Menga, “Or even introducing myself as the surgeon even though the resident has already told them that I’m coming to see them and turn to the resident for their recommendation. My approach is I’m here to take care of the patients—obviously there are some things you might get offended by—but at the end of the day, my ego goes out the window when I walk in to take care of the patient.”

At the same time, he says, “There are some things we have to call out when they happen in real time.”

For those considering careers in medicine, access to role models who look like them can make or break their decisions. 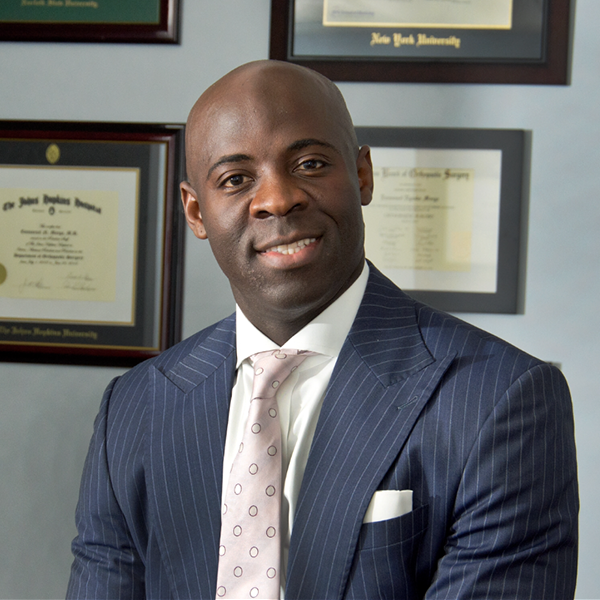 “This is something I’m passionate about: promoting inclusion and diversity, because at the end of the day, it works out best for the patients we’re taking care of.”

“I think sometimes people are influenced by that: It’s like ‘No one looks like me, so why should I do it? I don’t really have the mentorship or see people who look like me and who I can approach and ask them how to go into that specialty,’” says Menga, emphasizing he has had many influential role models and mentors throughout his education and career. “And it’s not necessarily the role of the mentee to go out and seek mentors. I think sometimes the onus is on the mentors to go out and look for people they know they can motivate to do things better than them.” With the AO Access mentorship task force, we are developing and piloting a formalized mentorship program that we hope will facilitate the matching and outreach between mentors and mentees.

Menga says AO Access is working to implement programs, policies, and organizational structures that reflect a diverse and inclusive global community of health care professionals including mentoring to make the AO the most productive, innovative, and sustainable learning community for the benefit of our patients.

“Within AO Access, part of it is being open to the fact that unconscious bias does exist, and having leadership take a bigger role in trying to understand and improve our approach to mitigating the unconscious bias that we know exists,” he said. “For me, making the time to get involved with things I know can change the world and make the world a better place is important.
﻿