Thirty years ago, Prof Geoff Richards joined the ARI as a PhD student. Having been its director since 2009, he has successfully provided the institution with a new lease on life. 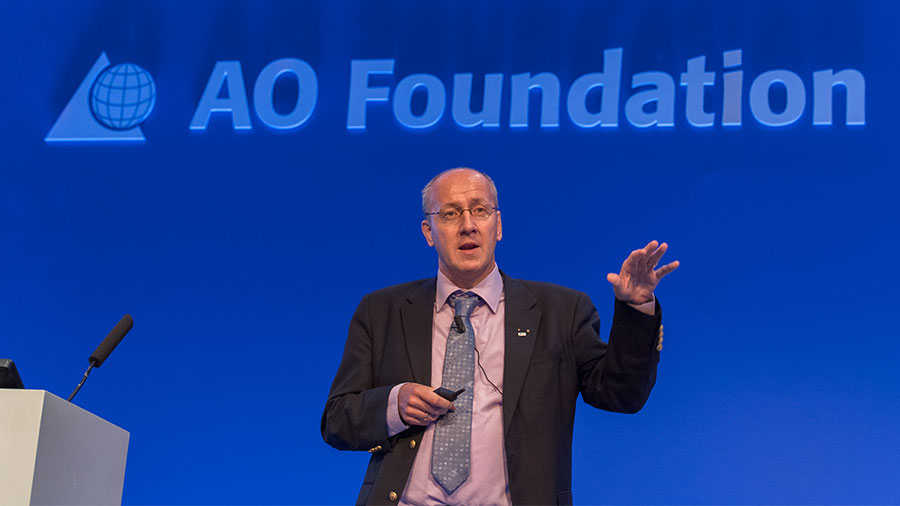 Thirty years ago, Prof Geoff Richards joined the ARI as a PhD student. Having been its director since 2009, he has successfully provided the institution with a new lease on life.
Even in a scientific career as diverse and multifaceted as that of Prof Geoff Richards, director of the AO Research Institute Davos (ARI), it represents a notable career milestone: 2021 marks the 30th anniversary of Prof Richards first becoming a member of staff at the institute.

Having graduated from the University of Wales in Aberystwyth (UWA) with a BSc in Cell and Immunobiology and an MSc in Biological Electron Microscopy, Richards first arrived in Davos in 1991 as an exchange student. Originally, the plan was to spend a year in the Swiss Alps before returning to UWA to undertake a PhD. "Although I didn't like Davos at all for about the first three few months I was here, yet I ended up staying and have been here ever since," Richards recounts. In 1997, he completed his PhD in Cell Adhesion externally.

In his first few years at ARI—still known at the time as the Laboratory for Experimental Surgery (Labor für experimentelle Chirurgie Davos, LECD)—Richards immersed himself in the area of interface biology, examining how tissue cells attach to implants. Richards steadily worked his way up the ranks over the subsequent decades: starting out as a PhD student he later became a group leader and a program leader before eventually being appointed director in 2009. He also became a mentee, as well as a close friend, of Prof Stephan M Perren, AO founding father and director of the ARI from 1967 to 1996.

In recent years, the institute has increasingly turned its attention to digitalization and its potential for therapeutic applications. "One thing we've been focusing on are data-driven methods of fracture healing," Richards explains. "For example, sensor-generated data enables us to precisely carefully measure the healing progress of fractures. It can reduce the need for costly tools such as X-rays with associated risks to the patient while at the same time allowing us to carry out much more patient-specific therapies."

A new technology developed at the ARI and recently licensed to the Swiss startup mimiX Biotherapeutics is CymatiX, a 3D biomaterials printer that uses sound waves to fabricate multi-cell tissue constructs, rather than the standard printing through a needle (which is slow, affects the cells and puts high demands on inks that must flow through the needle, yet quickly set to maintain cell position within the print- all resolved with the new fast, gentle printing method). "All of our research projects are directly relevant to real-world clinical problems," says Richards. "Among our main objectives is to ensure that patients can quickly benefit from new and improved treatment methods."

Examples such as these, says AO Past President (2000–2002) and honorary member, Dr Joseph Schatzker, illustrate how fundamentally Richards has managed to rebuild the ARI. Before he took over as director, the ARI still was very much limited to its historic role as the AO Foundation's academic substructure, Schatzker notes. Originally, the ARI and the research it produced was a fundamental building block in the establishment of the AO Foundation. However, after the retirement of Prof Perren as director, its relevance began to decrease. "Geoff transformed the ARI from a subordinate support institution into an intellectually and financially independent place of learning and research," Schatzker says.

Today, he adds, the ARI is world-renowned as a result. "The numerous prizes and awards won by its scientists in recent years are a case in point—they illustrate the very high quality of research being done at ARI," says Schatzker. "And that's Geoff's achievement, who, in building on Prof Stephan Perren's legacy, has managed to firmly place the institution on an independent scientific footing."

As director, Richards has also put an emphasis on forging new academic connections with universities, professional societies and associations and other institutions around the globe as a means of fostering learning and research. "Geoff is a very talented communicator," says the AO Foundation's CEO and Vice-Chairman, Christoph Lindenmeyer. "He has built an excellent local and global network, making the ARI well-known internationally." As a result, says Lindenmeyer, the ARI is consistently able to attract the best and brightest minds. In the ten-year period between 2009 and 2019, 145 young surgeons and scientists from all over the world came to Davos for an ARI fellowship to engage in research and development projects with a focus on real-world clinical problems.

"Geoff Richards has been tirelessly promoting the ARI and the entire AO, not just scientifically but also in terms of the role it plays in its community," adds AO founding father and Past President (2000–2002), Prof Peter Matter, pointing to the many roles and functions performed by Richards outside of his ARI duties. Currently, Richards is president of Science City Davos as well as a member of the Davos Digital Forum, the Lions Club Davos-Klosters and Graubünden canton's steering committee for health tourism, to name just a few.

Richards is also the recipient of numerous academic awards and honors. Among others, he is a Fellow of the Learned Society of Wales (FLSW), an International Fellow of Tissue Engineering and Regenerative Medicine (FTERM) as well as a Fellow of the Orthopaedic Research Society (FORS). In 1999, he co-founded eCM journal, the first online only open access journal in the fields of Biomaterials, Tissue Engineering and Regenerative Medicine and Orthopaedics. "I consider it my biggest achievement," says Richards. "I firmly believe that everything should be accessible freely—with eCM we pioneered open access publishing by showing that this approach is both possible and economically sustainable."

Working at the ARI for three decades has shaped Richards' entire life, he says. "Davos has very much become my home—it has matured me, it has rounded me down, and, although I remain very much connected to my Welsh roots, it has also Swissified me." What hasn't changed are his fundamental values, chief among them honesty and openness in the daily interactions with those he works with. "I've always had a lot of respect and empathy for my team—it's where I draw a great deal of motivation from."