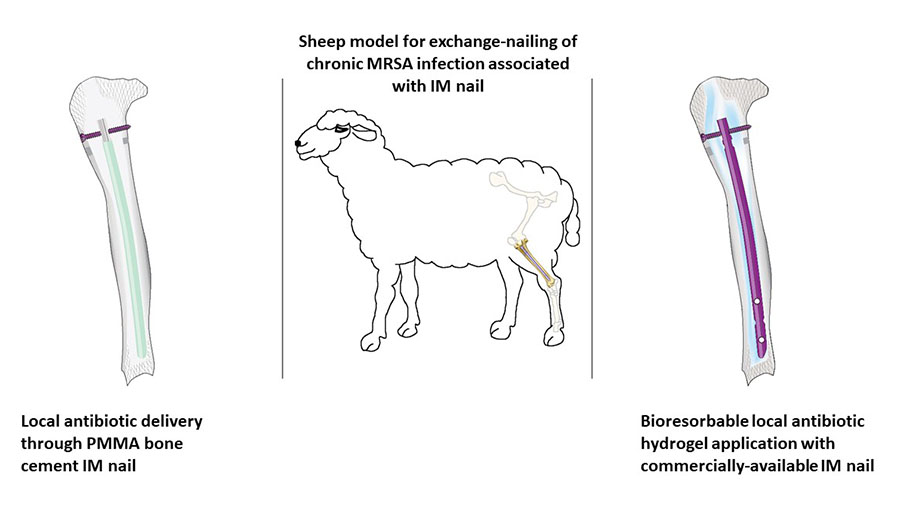 Researchers at ARI in Davos, Switzerland, have developed an antibiotic-loaded hydrogel for the treatment of orthopedic infection. The team consisting of materials scientists, microbiologists, and clinicians developed the therapy to be applied to the surgical site, resulting in a sustained release of antibiotics as it biodegrades.

The hydrogel was combined with gentamicin and vancomycin and evaluated in preclinical models of intramedullary osteomyelitis associated with a tibial nail in sheep. These experiments were conducted with ARI’s preclinical research team of veterinary surgeons. Polymethyl methacrylate (PMMA) bone cement, the traditional method of local antibiotic delivery, was used as the control group.

Antibiotic concentrations released by hydrogel are approximately 100 times higher than those from PMMA. In a two-stage revision protocol for methicillin-resistant Staphylococcus aureus (MRSA), the hydrogel outperformed PMMA with all sheep successfully treated. When used in a single-stage revision surgery, hydrogel also yielded a 100 percent cure rate for MRSA.

Hydrogel has a number of possible advantages over PMMA as a delivery vehicle for local antibiotic therapy. In addition to optimized pharmacokinetic release, the hydrogel’s biodegradability means that it can be used in single-stage surgeries and does not require later removal.

The team at ARI has since obtained AO Innovation Translation Center development incubator funding to translate this concept from preclinical to clinical research.