AO community pays tribute to past president, Prof Siegfried Weller, who has died 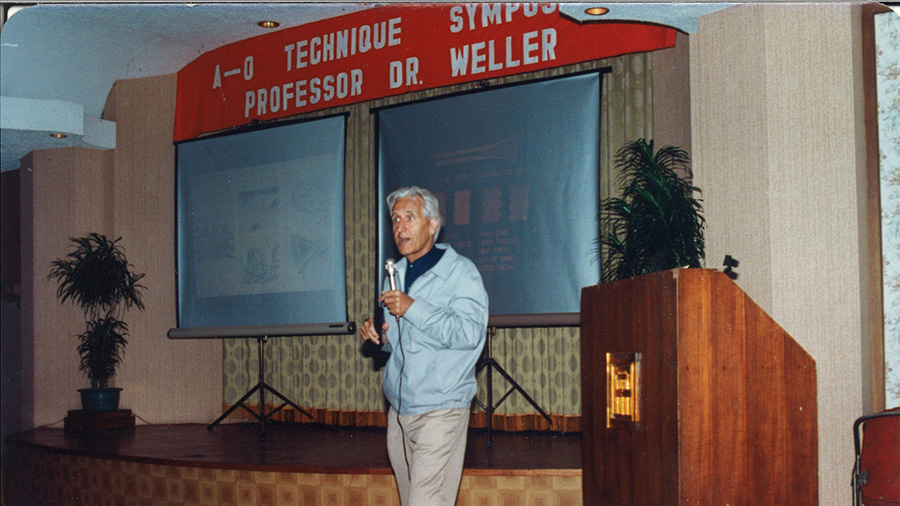 Professor Siegfried Weller, eminent orthopedic surgeon, active proponent of the AO principles, founding member of AO Germany, and AO past president (1994-1996) passed away in Tübingen on August 28. His funeral takes place on September 6 in Tübingen.

News of his death prompted an outpouring of tributes to his considerable contribution to the AO mission from prominent members of the AO community across the world. Weller's continued commitment to expanding the AO's reach in the Asia Pacific region was identified as of particular and lasting importance.

As Eugen Kuner, of AO Germany, recalled, Weller was particularly open to interaction with members of the AO community, and always made time to act as a mentor to younger generations. Many throughout the AO have their own stories of how they first met Weller, and what impact he had on their careers.

AO past president (2014-2016) Suthorn Bavonratanavech said "I met Weller for the first time during my residency for the introduction of the AO concept for surgeons in 1975. At that time, I was still a young resident. I attended this course at the hotel and was truly inspired by the concept, which pushed me to explore more about what I could contribute and make changes in my approach to ensure patients receive the best care and fracture treatment."

"I worked with Weller to bring the courses to Thailand and later elsewhere in Asia. The first course launched in 1985 at the Orthopedics Department at the Promonglutklao Military Hospital and Medical College, which I headed. It generated high levels of interest among orthopedic surgeons and was followed by an operating room personnel (ORP) course in 1986. One of Weller's greatest achievements in Thailand was transforming the educational courses to help patients recover better and faster."

"In Asia, he was a true ambassador and mentor for orthopedic surgeons in countries across the region, including: China, Hong Kong, India, Indonesia, Japan, Korea, Singapore, Taiwan. He inspired every surgeon he met, and many went on to become key opinion leaders in their fields. He was integral to the development of a strong AO community across Asia – delivering a real paradigm shift in the approach to surgery and new understanding of the principle that life is movement and movement is life."

Weller had the ability to see potential in talented young healthcare professionals and was a natural mentor and inspiration to many. Many of those who went on to become senior figures within the AO speak about the vital role that Weller played in their advancement. From the start, Weller was a clear advocate for educating ORP in the AO principles, launching regular courses for surgical nurses twice a year in Tübingen.

Past director of nurse education at the AO (1977-1994), Mrs Rigmor Texhammar, said that Weller "understood the importance of continuous education for all in the OR and his strong support for AO courses and ORP has been invaluable." She highlighted the role he played in setting up the "Op-Journal" in 1985, a much-needed addition to literature available specifically for ORP. "During our many visits to Asia in the 1980s, I got to know Weller as an enthusiastic, dedicated, and tireless teacher. His presence at the AO courses for surgeons and ORP in Japan, Korea, Malaysia, South Korea, and Taiwan, always meant something special to both participants and faculty" Texhammar said.

AO past president Joseph Schatzker speaks for many in the AO community, when he says "he was not only a passionate exponent of the AO philosophy of trauma care but also an equally passionate exponent of all the virtues of the AO surgical community. He stood for excellence, fairness, and equal opportunity. His wise advice will be greatly missed. We have all lost a great and courageous friend."