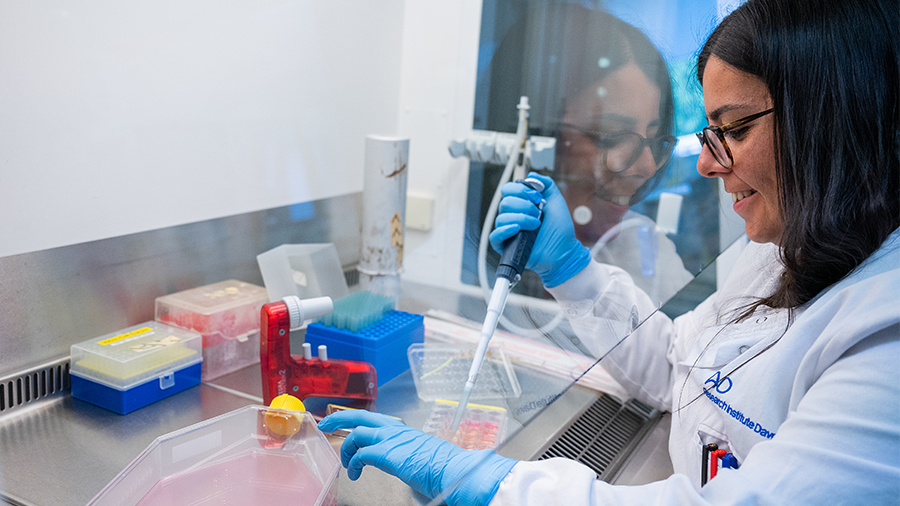 With more than 20 published scientific papers, an array of international research collaborations, and research funding from the Swiss National Science Foundation and the Japan Society for the Promotion of Science, AO Research Institute Davos (ARI) scientist Valentina Basoli, PhD, is carving out an extraordinary career in research. But she’s quick to point out that she hasn’t come to this solely on the basis of hard work, nor has she done it all alone.

Basoli, a native of Sardinia, Italy, is a research scientist in the Regenerative Orthopaedics Program within the Disc and Cartilage Biology group at ARI. She joined ARI in 2017 as a postdoc within the Stem Cells group studying mesenchymal stem cell markers and donor variations before and during chondrogenic differentiation. She collaborates with various research groups to develop biosensors and pathological models for testing drugs. She currently is pursuing a degree in translational medicine and biomedical entrepreneurship at the sitem Center for Translational Medicine and Biomedical Entrepreneurship (University of Bern, Switzerland).

It all started when she was just three years old.

“I decided to be a scientist at three years old because I was fascinated with the white lab coats I saw health care workers wearing when I was visiting a hospital. I didn’t really know what science was. I was just in love with the white lab coat,” she recalls with a smile. “I received my first toy microscope when I was almost four years old, because I was so in love with microscopes and being able to see small things. That was me.” 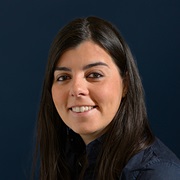 As a teenager, she worked as a sailor for a wealthy Italian family, the matriarch of which was gravely ill. That woman’s illness inspired her to find a branch of science in which she could help people.

“At 18, when I went to university, I decided to study molecular biology with the idea of studying genetics and diseases in order to, ideally, find ways of helping sick people. That’s basically why I’m a scientist,” says Basoli. “The translation of science into the clinics in order to help patients is why I do what I do.”

Raised by parents who were architects—a balance between the art of design, mathematics, and materials science—Basoli says she always felt supported in her interests.

“I’m very lucky because it was in my family culture to be supportive: We got to play musical instruments, for example, and my parents always supported me in continuing to follow my passions,” she says.

Inspiration has been in plentiful supply across Basoli’s education and career. She credits three professors in particular: former Ludwig Boltzmann Institute (Vienna, Austria) Prof Heinz Redl and UNISS Prof Margherita Maioli for teaching her the role of teamwork in science, and ARI’s Prof Sibylle Grad, who is mentoring her on  how to supervise students and projects.

“Good mentors set an example because they are always with the students, showing us that students have a space in their very full schedules.”

“From Profs Redl and Maioli, I learned how to communicate and collaborate with people in a scientific team. This is the most important part of science. Ultimately, science is a lifestyle,” she explains. “My mentors have showed me how—with kindness and being humble—it is possible to achieve results. If you enter a lab—or any kind of job—with the wrong attitude because you think you are the best, you will never get anywhere. Good mentors set an example because they are always with the students, showing us that students have a space in their very full schedules.”

That kind of support is paramount not only for budding scientists, but for any young professional, Basoli believes.

“If you feel alone in any job, you will not enjoy it anymore. You will not have fun and you certainly will not be motivated,” she says. “When you really believe in something as a team, you’re motivated and you can build something together.”

Basoli considers herself like many of her peers, emphasizing that there is a good gender balance—about 50 percent male and 50 percent female—among ARI researchers. But she notes that women in research are generally underrepresented in leadership roles. Over the course of her career, she has heard disparaging remarks about both Italians and women.

“It can happen quite commonly that people will learn that I’m Italian and say, ‘Oh, so you are part of the mafia.’ And there are other stereotypes, like that people from southern Italy don’t do anything, or we are just ice-cream makers, or that we just love the ‘siesta,’” says Basoli, who typically replies, “I think you have not traveled much in your life, because if you had traveled, you would be asking me about our artists, writers, our music, our geography, our scientific contributions.”

Basoli says she comes by her candor naturally: Her mother was one of Sardinia’s first female architects.

“She studied at university in 1968, which was really revolutionary during that time, and she is a feminist. And in our family home, there was not man’s work or woman’s work. Everyone worked,” she explains. Not surprisingly, gender stereotypes get an icy reception from Basoli. “For example, l still see this, even in science: If a man says something, it automatically is credible, but if a woman says the same thing, it’s questioned. I even heard a male colleague reporting, ‘Hiring a young female scientist could be dangerous sometime because she could get pregnant and could be a risk in terms of lost time and money. I said to my colleague who was with me, ‘This is disgusting and not acceptable in our time; everyone must be treated independently of gender and personal choices.”

“Teams can really play an important role in protecting and supporting their peers.”

The importance of inclusion

Basoli says inclusion—a key aspect of the AO Access initiative, establishing diversity, inclusion and mentorship firmly within the AO and demonstrating the organization’s commitment to addressing existing barriers to entry and advancement, and to identifying and overcoming barriers—is simply logical.

“In research, we should not exclude anyone who could offer solutions to patient problems,” she says.

Basoli’s advance for people facing barriers to realizing their goals is simple.

“No one is alone. What is important is to be part of a team. When you demonstrate what you can bring to the table, you should be supported and not prejudged or discredited on the basis of your sex, gender, religion, sexual orientation, skin color, etc,” she says. “Teams can really play an important role in protecting and supporting their peers.”