Bacteria and low back pain—fact or fiction? 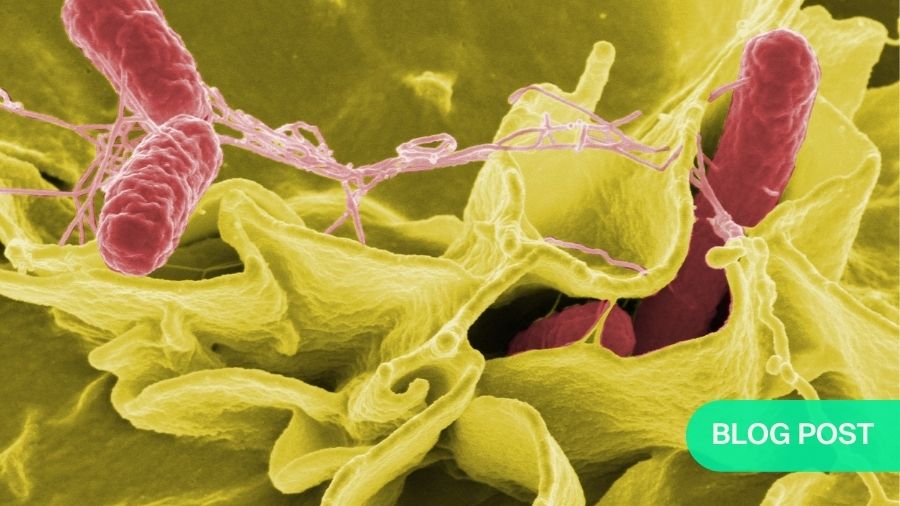 Gone are the days when we thought that bacteria were only outside the environment and the human body is sterile in health. We now know that our body is the host for huge amounts of microbes, and we are clearly outnumbered by a ratio of more than 1:101. The human body has one trillion human cells but hosts nearly 10 to 20 trillion microbes2. More importantly than just the number, our cells carry between 20,000 to 25,000 genes, but it is estimated that the microbes inside have a genetic diversity of 500 times or more2.

While the microbes are all over our body, the bulk of them are in the intestinal tract, mostly in the colon, and there are reports that the bacteria alone would weigh three to five pounds, thereby qualifying to form an individual organ.

The relationship of human and bacterial co-existence is very complex and has attracted many nomenclatures. Co-existence of mutual benefit was coined the term 'Symbiosis', a Greek term denoting 'together and living'. If one partner benefited at the expense of the other, the germ was called a parasite, and if the co-existence resulted in a disease, it was then a pathogenic relationship, and the organism was called a pathogen. If the bacteria is benefited without affecting its host, it was a 'commensal', and if it benefited the host as well, it was a 'mutualist'.

What is most important is the fact that, although man and bacteria may co-exist in symbiosis, the relationship could change at any period depending on the alterations in the environment and changes in the host-germ immunity status. Organisms that are 'friends' to the host in one region of the body may not be the same in another region. When these organisms are transported and implanted in a different organ, there can be a conflict triggering off an immunological and inflammatory response. This is exactly what probably happens when the skin bacteria P.acnes, considered to be a perfect and harmless commensal in the skin, finds its way to the disc or to a place where there is an implant or prosthesis in the body3,4.

The importance of microbes in health and disease was not clearly understood when cultures of the bacteria were the only method to identify bacteria. Many of these bacteria involved are very slow-growing, fastidious, or anaerobic and difficult to culture. The application of culture-independent techniques based on DNA typing for the identification of bacteria, such as metagenome sequencing, has made it possible to identify the entire bacterial flora in any tissue5. For example, the profiling of the gut microbiome in humans has brought about a paradigm shift in thinking of many disorders that were initially thought to be idiopathic. Changes in the intestinal microbiota have been associated with several autoimmune diseases, viz., multiple sclerosis, inflammatory bowel disease (IBD), type 1 diabetes, Parkinson's disease, Autism, Depression, Neuro-degenerative disorders, and psoriasis have been linked to changes in the gut microbiome6,7. Spondyloarthropathy, a disorder that predominantly affects the Spine and Sacro-iliac joints, has been linked to gut inflammation due to changes in the gut microbiome8.

The above reports evoke a serious suspicion of the possible role of microbial flora in determining the health of the spine.

Do bacteria control our spine health, disc degeneration, and low back pain?

Spine disorders are the most common of all the musculoskeletal disorders of mankind9. Non-specific low back pain, unfortunately, forms the bulk of this group, and its socio-economic impact is ever increasing. One of the most common causes for non-specific low back pain (NSLBP) is disc degeneration and naturally, there is a lot of focus on reversing degeneration or even attempting to regenerate diseased discs. While it is agreed that there are considerable genetic and epigenetic factors that influence degeneration, there is a recent theory of subclinical infection that has commanded the interest of both its proponents and opponents10–12.

Do healthy lumbar discs have bacteria?

We have all been traditionally taught and hence believe that the nucleus pulposus is avascular and do not contain any bacteria. But this has been proven wrong in our work recently published in the European Spine Journal5. By a combined approach of both proteomics and next-generation sequencing (NGS), bacteria of a very diverse spectrum were documented both in healthy and diseased discs. For the purpose of healthy discs, discs harvested in live condition from voluntary brain dead donors (after the heart, lungs, liver, and kidneys were harvested), the lumbar spine along with the discs was harvested. These patients did not have any history of low back pain, and the discs were Pfirrmann Grade I without any evidence of degeneration in the MRI or CT. The controls were compared with disc harvested during surgery in patients with disc degeneration and undergoing fusion.

The above study showed many interesting features. First, contrary to the popular belief that discs were sterile in health, the nucleus pulposus of healthy disc showed a rich bacterial presence, what we can call as 'the normal disc biome'. There were many bacteria present, and they differed from the bacterial flora of the degenerated disc in both the type and the ratio of the bacteria. Second, it is not the presence or absence of bacteria as they are present in all of us in great numbers. What is really important is the altered bacterial ratio resulting in pathology and diseases and is called 'Dysbiosis'. Simply stated, dysbiosis is an alteration in the numbers of 'Good' and 'Bad' bacteria. Dysbiosis has been implicated in many diseases elsewhere in the body. This phenomenon has been demonstrated in the discs also and could play an important role in triggering a low level, but persistent inflammation called 'inflammaging', which could initiate disc degeneration (DD)13,14.

When bacteria were first demonstrated in disc disease and an infection etiology was proposed 3,11, there was a lot of disbelief, and many felt that it could be contamination rather than colonization. There is, however, growing evidence against contamination theory. In a NASS outstanding paper -award-winning paper, presence of inflammaging was demonstrated, and an upregulated presence of complements suggested that this inflammation could be of an infective origin13. More importantly, by the application of proteomics, which can measure the presence of proteins at femtamole levels, disc tissues have been shown to have numerous Human Defense Response Proteins14. This clearly documented a host response to colonized bacteria. Defense proteins such as Alpha defensin-1, Azurocidin, Lipocalin 2, Immunoglobulin heavy constant mu, Haptoglobin, Lactotransferrin were found to be either uniquely present or upregulated by many folds in the presence of degeneration. Also, degenerated disks showed upregulation of pro-inflammatory proteins Complement C3, Heparan sulfate proteoglycan 2, Apo-lipoprotein A1, and downregulation of their inhibitors Clusterin, Superoxide dismutase -3, and Tissue inhibitor for matrix metalloproteinase-3. Evidence for activation of all three complement pathways (classical, alternate, and lectin) was also found in DD. All these add support to the proposal that degenerated discs are in a pro-inflammatory state, and bacteria may be the initiator of degenerative disc disease (DDD) by triggering inflammaging.

Of considerable interest is also the controversy whether Modic changes seen very frequently in the presence of disc herniation is of infective origin.

Modic changes—what do they mean?

Modic changes were described as MRI signal changes in the endplate more than three decades ago but were literally overlooked for the first two decades. A lot of interest has gathered around this entity in the last decade as amongst patients who have NSLPB, those with Modic change form a separate phenotype15. Patients with Modic change have more severe pain than those without, are known to have more frequent episodes of pain, have night pain, and respond poorly to conservative and surgical treatment. Originally the etiology of Modic was considered to be traumatic disruption of the endplates, which led to the establishment of the 'Disc marrow contact' exposing the hitherto immunologically sequestrated disc tissue to the immunological cells of the bone marrow16. While this could be true, an increasing number of researchers believe that Modic change could be a process of infection where bacteria that enter the disc either by a disruption of the annulus fibrosis or endplate can cause lysis of the endplate cartilage16. An antibiotic trial was also reported to benefit patients with Modic Type I17. However, a prerequisite for a successful antibiotic therapy would be to identify the inciting pathogen.

There has been an increasing association of P.acnes with the etiology of Modic change18. Many studies have successfully cultured P.acnes from diseased discs, others have documented the presence of P.acnes in herniated discs, and re-inoculation animal studies have successfully produced typical Modic changes in healthy vertebra19. Fueling this theory further are the reports that more bacteria may be involved than just P.acnes alone. There is now definite proof that the discs in both states of health and disease have a rich microbiome, and any one of these bacteria may trigger inflammaging.

Our ability to relate to microbes and to associate them to our health and disease has been linked to our ability to identify microbes. Before Leeuwenhoek discovered the microscope and saw the microbes nearly 350 years ago, almost all diseases were thought to be due to vague reasons—like poisonous air (Malaria – Bad Air) or the result of a royal curse (tuberculosis). Today we are in need to rewrite our relationships between microbes and their hosts. From being designated as pathogens associated with us only in disease, we have moved a long way forward to understand their intricate relationship and our dependence upon them for daily living. Research suggests that gut bacteria in healthy people are different from those with certain diseases. People who are sick may have too little or too much of a certain type. Or they may lack a wide variety of bacteria. It's thought some kinds may protect against ailments, while others may raise the risk.

The future will surely see a lot of work on this subject and attempts of man manipulating the microbial world for his benefit.

Rajasekaran has a special interest in spine surgery, arthroplasty, and clinical research in major trauma. He leads basic science research in spinal deformities, disc nutrition and biology, and genetics of disc degeneration, and is recipient of numerous prestigious international awards.