Targeted therapies are a brave new world in cancer treatment 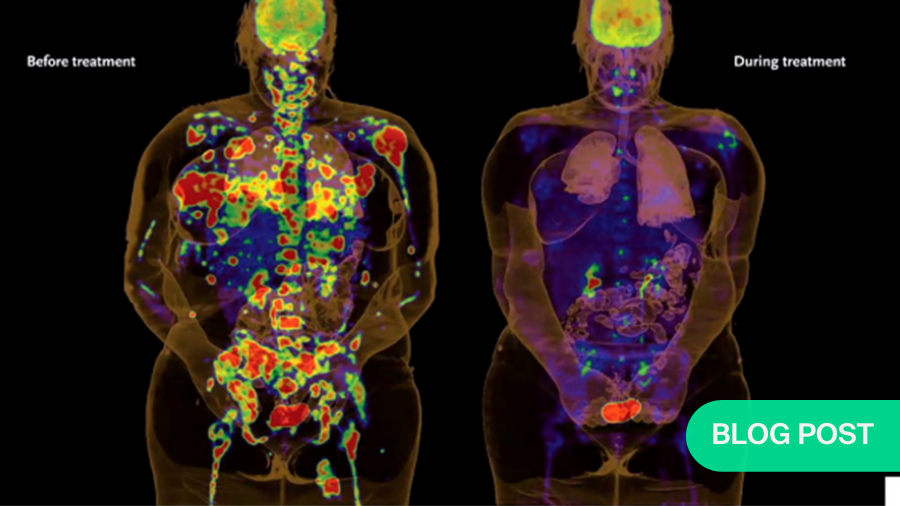 The scope of the challenge as a spine surgeon in care of cancer patients is vast. We know that up to 70% of cancer patients will have a spinal metastatic process at some point in their care. 600,000 individuals are expected to die from cancer in the United States alone. And over 1.5 million individuals will be diagnosed. It's quickly becoming a leading cause of death in the Western hemisphere.

The promise of trying to overcome cancer is not new. It has been a focal point of medicine around the world for decades, and there are cases now of successes. This is largely due to our ability to treat the most common cancers, such as prostate in men or breast cancer in women. Most recently, the advances that we're seeing in cancer care are based on the completion of the human genome project, which was a multi-billion-dollar effort that was completed at the turn of the century.

With those advances came rapid achievements in molecular biology and bioinformatics, which has now allowed us to sequence every gene in the human cancer cell. What took the US government and labs around the world over a decade and over a billion dollars, can now be done in less than a week for about USD 2,000. This has allowed us to look at cancer with a depth and breadth that's never been thought possible.

The genetic diversity of cancers is vast, so the question is, how do we translate our burgeoning understanding of cancer genetics to improve patient outcomes? Part of this has come through the use of targeted therapies. The hallmark targeted therapy, for example, is the BRAF V600E mutation that's commonly seen in melanoma. This has allowed the advent of several generations of therapies that are now effective, and FDA approved. But in addition to these targeted therapies, there are implications for non-conventional approaches, which are now taking the lead. Those are the use of immunotherapies, which use the body's own immune cells to attack the cancer cells.

In cancer cells, there are mutations or mistakes throughout the genome. What individuals around the world have shown is that these mutations can be recognized by the immune system when given the appropriate medications? One of those are checkpoint inhibitors like the Anti-PD-1 antibody, which were explored in a seminal research paper published in the New England Journal of Medicine in 2012. This approach allows for rapid and dramatic reduction of metastatic cancers, that prior to these therapies, had largely never been seen. It’s based on a complex interplay of the immune system, cancer cell, and antigen presenting cells. The biology of these interactions is being further and further elucidated. So, what does this complex biology mean for us as spine surgeons?
We commonly see these metastatic processes causing pain, neurological injury, and spinal cord injury. How do we incorporate this biological information to best take care of our patients? When we think about surgery for cancers or tumors involving the spine, we think about the histology, the neurological condition, how well is the patient doing? Is there spinal instability? How aggressive does the patient wish to be? What are the systemic disease status and the overall prognosis?

These last two factors are key, because the treatment of metastatic cancers is rapidly changing. A little over a decade ago, cancers like lung, melanoma and renal cell had an abysmal prognosis of a year or less. However, treatments have revolutionized in the last decade. One seminal study published in the New England Journal of Medicine shows how we can use targeted therapies to treat metastatic melanoma. After a couple of cycles, there is a rapid reduction in disease burden. This is further propagated with additional targeted therapies, lung cancer being the hallmark cancer.

Now we have drugs that can not only be used as first line agents, but also in the setting of cancer resistance. So, patients who have been treated with one drug and developed resistance, can now be treated with additional targeted therapies, with dramatic responses. In this study, greater than 75% of patients who have resistant cancers are now responding to a second-generation agent. Lung cancer, which was previously thought to have a prognosis of four months or less in the metastatic setting, now has a second- and third-line agent that’s allowing over half of people to survive for more than nine months. Newer and newer findings show that not only can you use standard treatments or targeted therapies, but you can combine these treatments and even prolong survival for over two years in the vast majority of patients.

Surgical interventions must now be built to last

So how does this impact us as surgeons? It allows us to say that cancer patients that have these mutations will have a prolonged survival and hence should be considered for aggressive surgical approaches. The immunotherapy revolution is also impacting lung cancer. One very recent paper demonstrated that 50% of patients in dual immunotherapy survived for over 24 months.

The same sort of story is developing in melanoma, where combination immunotherapy in metastatic melanoma is allowing similar survival curves. Previously, patients with advanced metastatic cancer were dying within four or five months. Now, the median is over 18 months and we’re even seeing some studies where patients live for five years or more because of the combination of immunotherapy.

This means that the treatments we offer when we see them for metastatic melanoma to the spine, have to be very durable. Those minimalistic techniques that were supposed to be palliative in nature and perhaps provide durability for five to 10 months are no longer sufficient for patients who are going to live for multiple years.

Indeed, the treatments are now so advanced that they have paradigms. Molecular typing is a big part of deciding whether to operate or just to treat with medication or radiation therapies. As a surgeon, having knowledge of these molecular types is very, very important.
A third example is in renal cell cancer, where the immunotherapy and targeted therapies are making a major impact. Now, if there is evidence of a metastatic process that's isolated, we are recommended to take those patients for surgery with curative intent, given that the systemic treatments are so good. This is in the metastatic process, where previously we would be advised not to be aggressive. We're now having paradigms which suggest that when we take care of these patients with limited metastatic disease, we should be very, very aggressive because of the outstanding systemic treatments these patients are able to receive.

Turning now to the rarer primary spinal column tumors, which as we all know are very rare, but heterogeneous. They're very varied in their biological and clinical aggressiveness, and we need to understand their biology better, but we are making advances. Many of those advances are being furthered by members of the AO Spine Knowledge Forum Tumor.

So how do we understand which patients are going to have an aggressive course and which will be cured by radical surgical procedures? We have recently published a paper through the AO Spine Knowledge Forum Tumor involving 333 spinal chordoma patients, across 13 centers. This study showed that there’s a SNP, a single nucleotide polymorphism and the Brachyury gene that may play a prognostic role. In terms of the overall demographic, the patients undergoing Enneking appropriate surgery have far better local control than those who go Enneking inappropriate. However, there’s a particular SNP in the T gene, which is a Brachyury gene responsible for embryonal development, and it’s known to be up-regulated and even duplicated in some cases of chordoma. This gene is associated with chordoma risk.

We now turn our attention to SNPS. SNPS are the changes that make you and I different throughout the genome that we inherit from mom and dad. When we look at the presence or absence of the SNPS, we see that those patients that do not harbor the SNPS, actually have a far poorer prognosis than those patients that do. This suggests that perhaps in the future, we can interrogate the SNPS, and then intensity modulate the postoperative treatments to help maximize survival.

Are there other molecular markers that are worth looking at? Well, we know that in many cancers, there's alterations to the TERT gene, which is a telomerase gene that allows the chromosomes to maintain their ends. These genes are mutated to high frequency in various cancers, including neuroblastoma or sarcomas. So, we ask very simply, are there mutations in this TERT gene and spinal column tumors?
Let’s remember, that the TERT gene is responsible for maintaining the ends of chromosomes. Carol Greider and colleagues were awarded the Nobel Prize in 2009 for this discovery. It’s fundamental to cell biology. When we looked at a cohort of 133 patients, in the chordomas, eight of the 84 actually had a mutation, and survival is heavily impacted by the TERT promoter mutation status. Patients that had the TERT promoter mutation survived far longer than those who did not, so this is an additional prognostic marker that could potentially help us predict which cancers will behave badly, versus those that might have a more indolent course.

This was not uncommon. We saw similar relationships between the TERT promoter and outcomes in other cancers, such as glioblastoma, the common brain cancer. In giant cell tumors, we now know that Denosumab targets the RANKL pathway, making it a standard treatment for patients who are unable to receive surgical resection.

There are advances too in the treatment of Chondrosarcoma, rare tumors involving the spinal column. These cases frequently involve mutations in the metabolic genes named IDH 1 and 2. We now have clinical trials for therapies that are targeting these mutations.

To summarize, as surgeons we still need to consider the fundamentals. We think about the histology, neurological function, performance status, instability, systemic disease, status, and patient wishes. However, things like prognosis, molecular composition and biomarkers need to also be a part of our understanding as spine surgeons, so we can provide more integrated decision making for our patients. This requires multidisciplinary discussions with the medical and radiation oncology teams.

Today, our level of surgical sophistication in spine tumors is incredible. We’re now able to do radical surgeries en bloc resections and reconstructions that previously were not feasible. But molecular advances are coming through very, very rapidly and they have a profound role in prognosis and therapeutics. As spine surgeons, we need to keep abreast of these developments.

Dr Bettegowda's research is dedicated to developing targeted therapies for patients with primary and metastatic tumors of the brain and spine. As part of this research, he has helped identify key genetic pathways that are altered in brain tumors, and he is developing clinical trials to selectively target these pathways. Dr. Bettegowda is also spearheading an ongoing clinical protocol to develop a simple blood test that can detect and monitor disease burden in patients with tumors affecting the central nervous system.

The article is based on a series of lectures by the AO Spine Knowledge Forum Tumor. A selection of the lectures is published open access in the AO Spine Clinical Library.