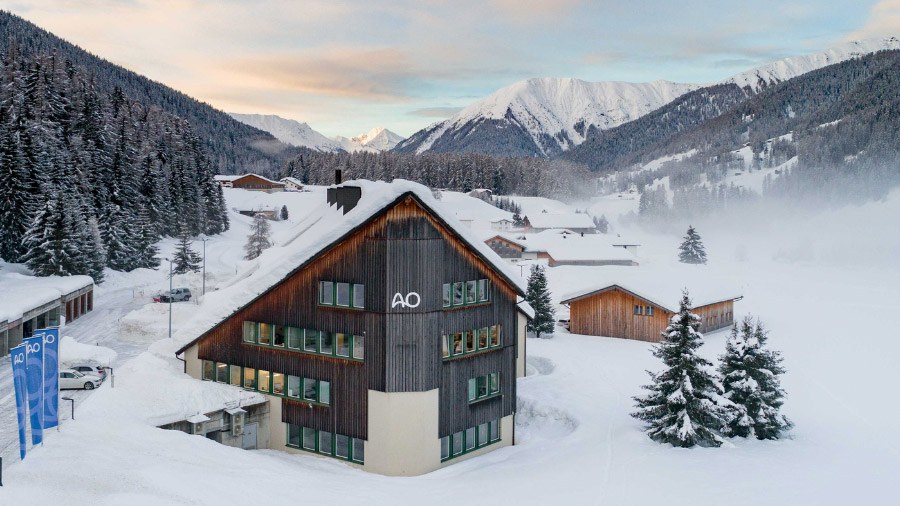 The AO’s eagerness to cross conventional boundaries in its mission to promote excellence in patient care and outcomes in trauma and musculoskeletal disorders is very well-known, but Belgian veterinary orthopedic surgeon and research scientist Marc Balligand knows firsthand the value of the organization’s education, research, and development expertise—all under a single umbrella.

“Mechanics and biomechanics very early on become two of my major interests particularly, after a 13- month research and clinical fellowship spent at the veterinary and medical schools of the University of Pennsylvania in Philadelphia, United States, in 1982–1983. Since then, I thought that if it ever became possible, I would spend some time among engineers—to leave the clinical aspect of veterinary medicine for a bit and move a little forward in trying to understand the things that we as clinicians in orthopedics use every day but may not understand very well,” he explained.

‘A great and productive experience’

When the opportunity for an ARI externship arose, Balligand enthusiastically seized it.

“To be frank, the only regret I have is that I wasn’t about to do that earlier in my career. By the time I started my externship at ARI, I was already 60 years old,” he said, noting that undertaking the experience earlier in his career would have benefited both ULiège and himself “because it was such a great and productive experience.”
On the advice of Prof Carl Kirker-Head, then AO VET chairperson, Balligand reached out to ARI Program Leader Biomedical Development Prof Boyko Gueorguiev-Rüegg.

“He was immediately very enthusiastic: As soon as I explained why I wanted to go to Davos, Boyko said, ‘The doors are largely open—come whenever you want,’” Balligand remembered.

After nailing down logistics—getting the support of his wife, Magda, who is also a full-time veterinarian, and finding an apartment in Davos—Balligand hit the ground running at ARI for what initially was to have been a six-month externship. He said he was fortunate that ULiège allows faculty to take sabbaticals for up to a year with full salary—so the externship was a win-win for both Balligand and ARI.

From day 1, he was warmly welcomed by everyone from ARI Director Geoff Richards to the Institute’s engineers, biologists, and orthopedic surgeons.

“I was immediately considered as a visiting professor. I got an office, a computer, and an ID card,” Balligand said. “My first meeting with Geoff Richards was extremely warm. Geoff told me, ‘You’re here! Welcome. You go anywhere, everywhere you want. If you need to talk to someone, you go to that person’s office. If you want to talk to me, you come to my office.’ I was really amazed at how warmly I was welcomed at ARI. It was an extraordinary experience.” 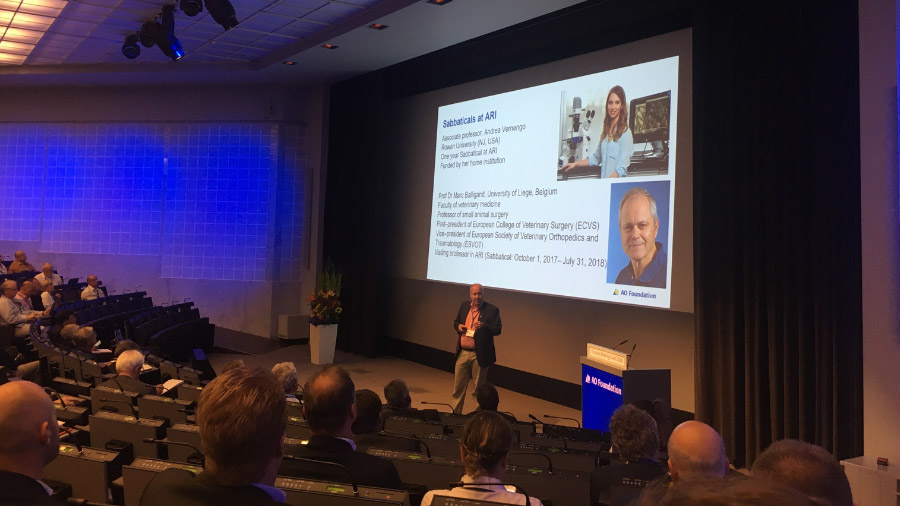 “I didn’t expect it in the beginning because I was at ARI asking to receive things, but they very quickly told me that my presence was a win-win for them. I understood that they were happy to have a clinician, although a veterinarian, spending six or twelve months with them. They said, ‘This is a rare occasion for us to have an experienced orthopedic surgeon staying so long as fellow at ARI,’” Balligand said. “The engineers knew that they would be able to engage with me and stay in contact for at least six months.”

Balligand came to understand that his ARI colleagues appreciated his insights.

“They regularly said, ‘Marc, it’s good for us to have you here,’ and they came to me with some observations and questions, even though their most important projects are those dealing with human patients,” he said. “Nevertheless, I think they liked the fact that I had some basic knowledge of mechanics and that my reasoning was not bad.”

Upon arriving for was to become a one-year externship at ARI, Balligand jumped feetfirst into the work, even actively supporting some experimental projects, in close collaboration with the Preclinical Services team, led by a colleague veterinarian Stephan Zeiter. 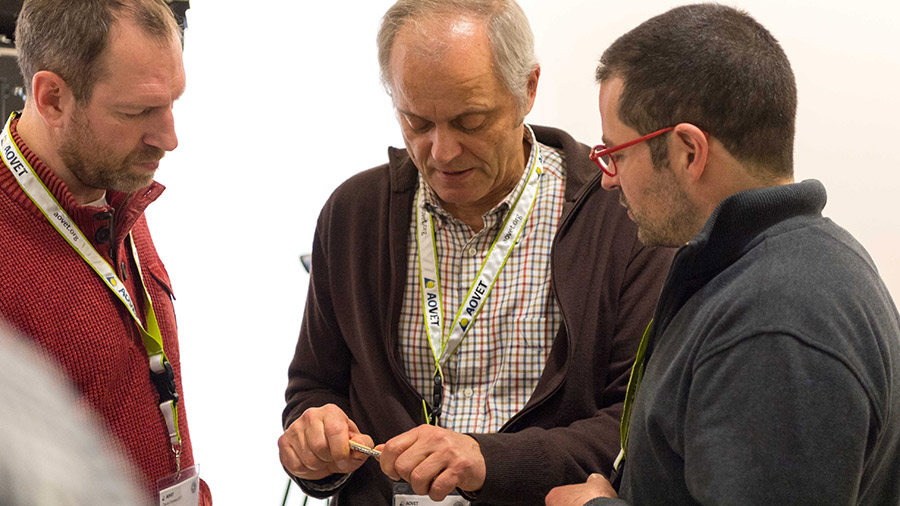 From idea to a finished product

It was during those discussions that Balligand heard about ARI resources to pursue feasibility studies.

“I went to ARI with an idea for a project about super-elastic external fixators. I hadn’t done anything concrete when I was in Liége, but I had prepared some slides explaining why I was interested in an external fixator to promote the concept of reverse dynamization,” he said. “This means starting with a construct that is not stiff, just allowing the animal to walk with the fixation to promote the development of fibrous callus and then progressively making the construct more rigid in order to promote the calcification of the soft callus. This is rather the opposite of what we have been doing for many years: starting with a stiff construct and then decreasing the stiffness (dynamization process) if bone healing doesn’t go as fast as we would like it to go.”

Balligand’s presentation to a group that included Richards, Gueorguiev-Rüegg, Stoddart, and several clinicians specialized in treating human patients, was well received—in fact so well received that he was immediately awarded an ARI grant to support a feasibility study.

“It was amazing how easy it was for me to go to the lab and make the first drawings and then present them to very skillful technicians in the lab, who redrew them in an industrial way to produce exactly what I had in mind. I am still very thankful to them,” he said. “I could test the stiffness, the ultimate tensile or compressive force of my construct on artificial bones. We recorded a lot of data and then ARI produced ten specimens of the fixator that I got to use once back in Liège.”

Though that extremely productive externship wound down in 2018, Balligand cherishes it—and he maintains ties to ARI to this day. In fact, he, Windolf, Ernst, and Varga are still collaborating on a smart plating project. And Balligand is cascading his fondness for ARI to the next generation of clinicians and research scientists. His summation of the ARI experience: “Great experience, great people, great facilities and needless to say, great location. The surrounding Swiss Alps offer magnificent scenery throughout the year and for those who like walking, running, skiing, or climbing—a great opportunity to stay in good physical and mental shape.“ 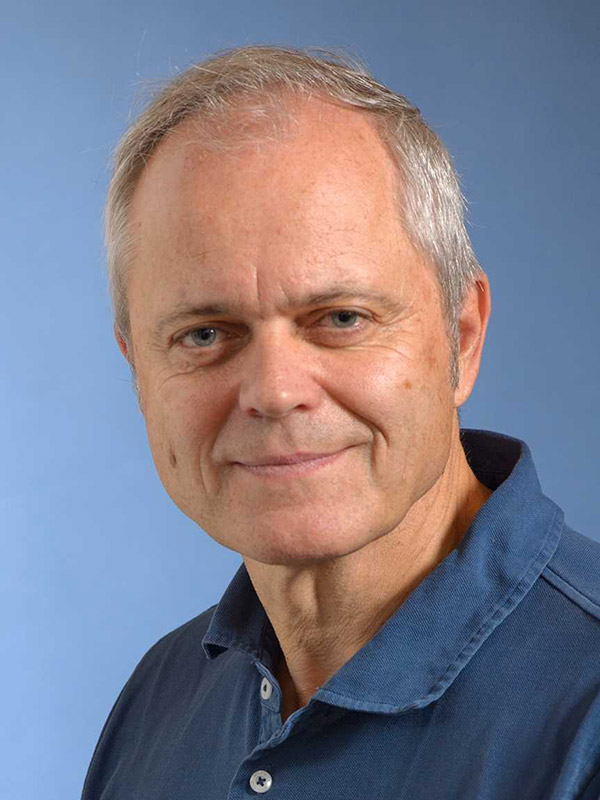 “I cannot be more enthusiastic because it was an extraordinary year,” said Balligand who, before beginning his ARI externship, was head of the ULiège Veterinary Small Animal and Equine Clinical Sciences Department. Additionally he has served aspresident of the European College of Veterinary Surgeons (ECVS) in 2000 and president of the European Society of Veterinary Orthopedics and Traumatology (ESVOT) from 2018 to 2022. He retired from the University of Liège in October 2021 at the age of 65. 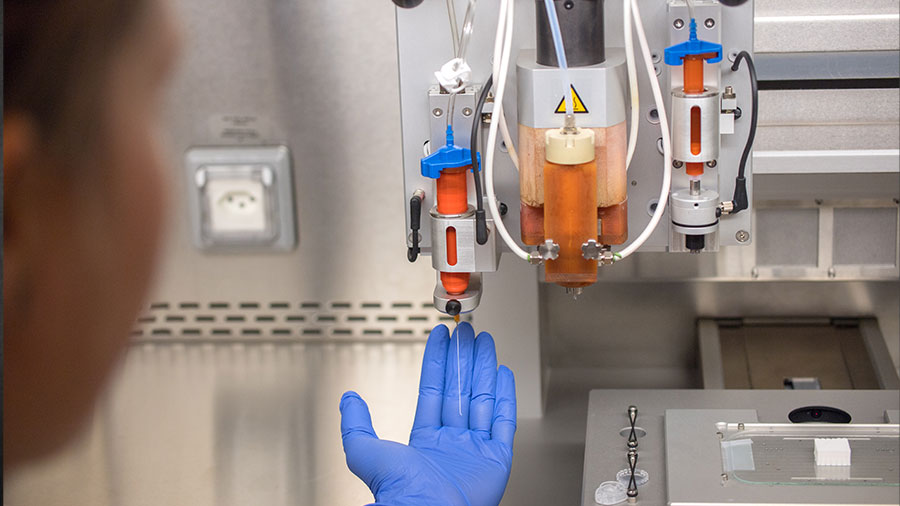