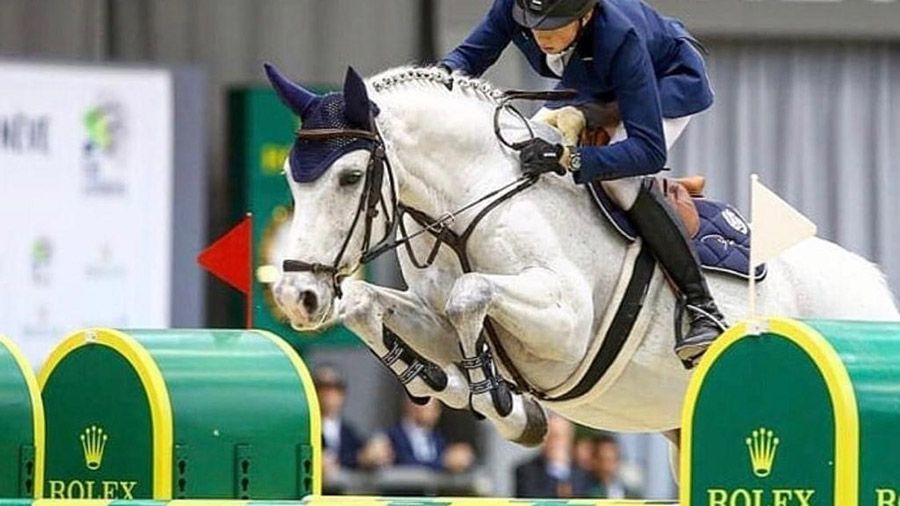 The 16-year-old gelding slipped in the pasture and fractured his right humerus (shoulder bone) in August, just days after carrying Switzerland’s Martin Fuchs to a 16th place finish in the Tokyo 2020 Summer Olympics.

“Clooney is a very special horse because he’s an excellent jumping horse. He won the FEI European Championships in 2019 and placed second in the 2018 FEI World Championships—and added a couple of other wins in big competitions—so everyone knows this horse,” Fürst says. “He was in the pasture, enjoying life on a well-deserved break, and he injured himself. When I heard that this horse was injured, we all thought, ‘This is not possible,’ because he had just been at the Olympic games and everything went well.”

With such a high-profile patient incoming, Fürst—director of the equine surgery clinic at the University of Zurich—was under pressure and so was his team. 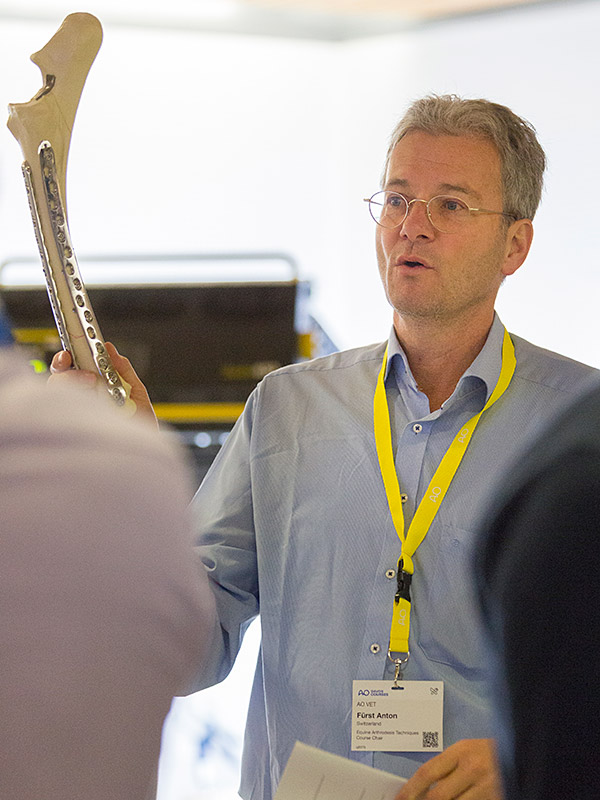 “As soon as we got the phone call, we prepared ourselves so that we could do a good examination and take x-rays once the horse arrived,” he explains.

During the examination and x-rays, Clooney was remarkably calm.

“That’s also what makes him so special. When other horses have a complete fracture, they are in pain and hard to handle [but] he just stood there because he is used to people,” Fürst says. “We took a couple of x-rays of his shoulder and we realized that the proximal humerus was broken completely and displaced. You’re not able to decide in two minutes what you’re going to do next.”

Clooney 51’s owner Luigi Baleri, rider Fuchs with his family and closest friends, as well as the trainer, soon were all at the clinic, waiting in silence at Fürst walked the horse backward—due to the nature of his injury—to the stable where a sling was applied for support.

“It was a fracture that, I have to admit, I haven’t seen before. Humerus fractures are very rare in equines, so I was thinking, ‘What can I do with this type of fracture?’” Fürst recalls. After examining some bone models, making some drawings, and even looking at the humerus of an equine anatomical specimen, Fürst knew that operating on his patient was out of the question.

“I immediately realized I would not be able to repair this very complicated fracture,” he says. “I talked to Martin Fuchs and the owner, and they asked, ‘Are you not able to do this? Or is nobody able to do this?’ I told them that probably nobody would be able to do it because, due to the anatomical situation, to gain access to the bone you have to transect very important structures, including one very important tendon—then the shoulder joint will lose stability, and you create many more problems. If I could have achieved good reduction and very stable fixation and put all of these tendons together, I would have done it.” 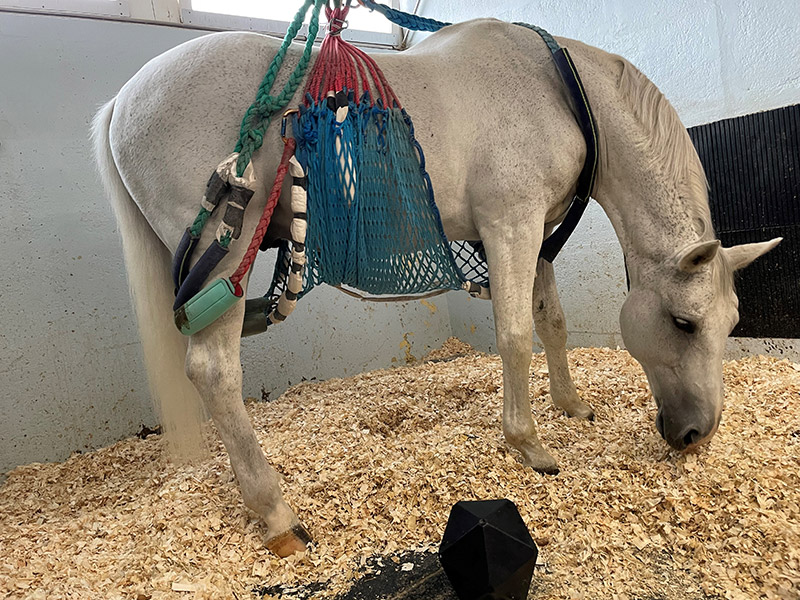 Clooney 51 stayed for 6 weeks in the Animal Rescue and Transportation sling (ARTS). 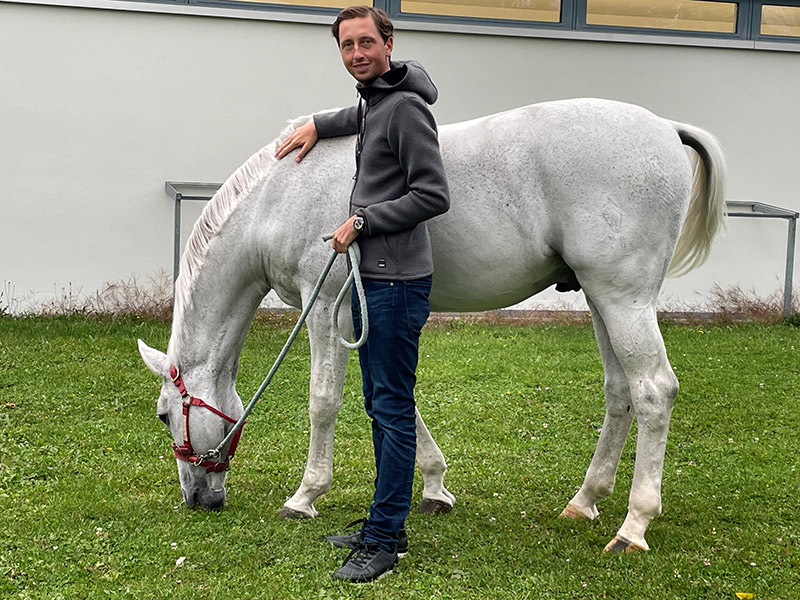 Clooney 51 with his rider, Martin Fuchs at the equine surgery clinic at the University of Zurich.

Fürst credited Baleri and Fuchs for their confidence in his treatment plan.

“They were the best owner and rider you could have in such a case. They never argued. It was a very good relationship so that we could discuss all of these things,” Fürst adds.

With Fürst’s cautious treatment plan, the dangers of general anesthesia and risk of infection were eliminated.

Clooney 51 stayed in the clinic for nine weeks. He remained in a sling for six weeks, and then the sling was removed and he was taken for a walk. Throughout his treatment, the horse remained calm; he was given very little pain medication but received a liquid preparation of turmeric as an anti-inflammatory.

“We were all very astonished. At the beginning, he had difficulty to advance his leg which was fractured, but after two weeks he was doing very well,” says Fürst.

During his treatment, Clooney 51 had visitors—including Fuchs, Baleri, his groom, and others from his normal environment—for four to five hours daily.

“I’m absolutely convinced that horses need attendance—people coming to them, doing things with them,” Fürst says.

While Clooney 51’s show-jumping career is over, Fürst’s treatment gave him a new lease on life and today his recovery continues with rehabilitation—and a leisurely retirement that includes both stable and pasture time. 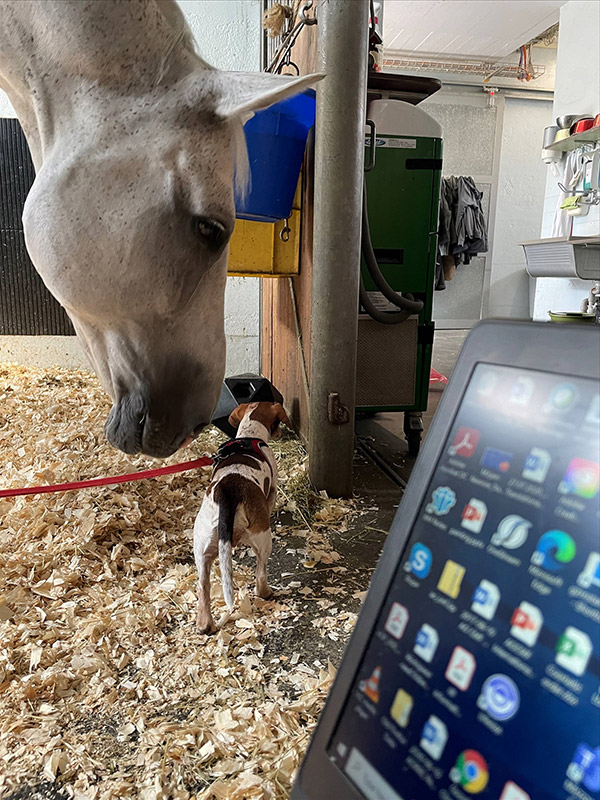 Home office chez Clooney: During his treatment, Clooney 51 had visitors—including Fuchs, Baleri, his groom, and others from his normal environment—for four to five hours daily. 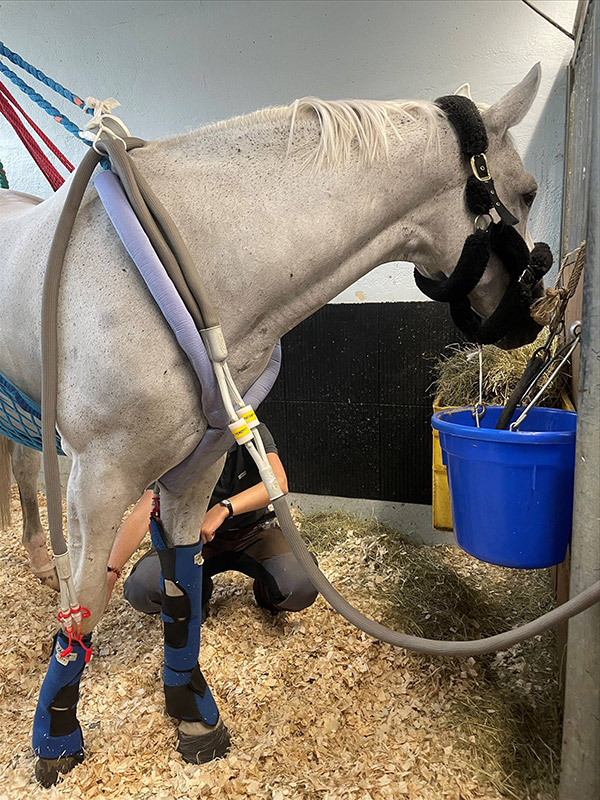 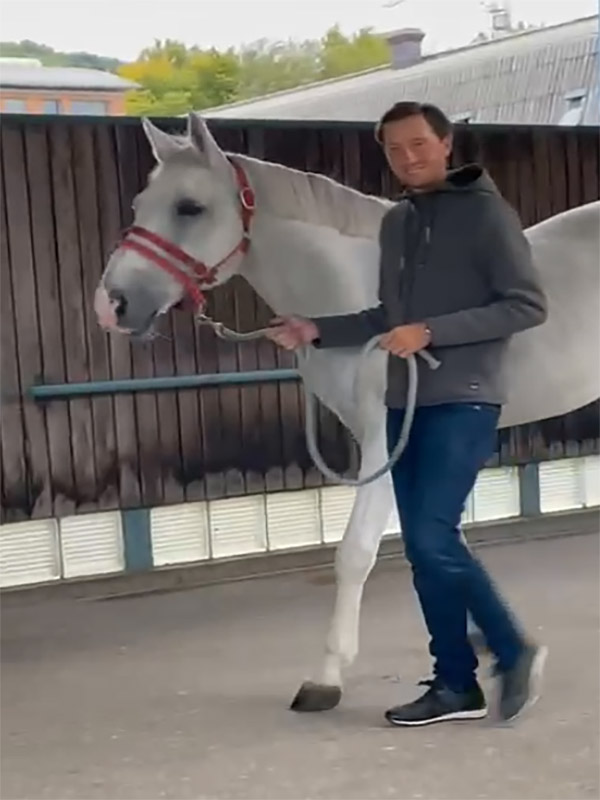 Clooney 51 walking at the equine surgery clinic at the University of Zurich with his rider, Martin Fuchs.
PLAY VIDEO

“What we wanted to achieve was a sound pasture horse that could live to the end his natural life. It was clear for everyone that this horse would eventually develop joint arthrosis and would remain slightly lame and unable to compete. Today, he’s a happy horse. Every horse we treat is very important. An ordinary horse is just as important as a famous horse.”

Fuchs could not be more pleased that his partner is making a good recovery.

“Clooney is a very smart horse to handle. He likes to work with humans and that makes it easy to take care of him. He taught me a lot about giving him confidence. When I was able to give him confidence, we had no limits in whatever course,” Fuchs says, adding that he is not surprised that Clooney was a great patient. “It was as if he knew exactly what was going on and how he had to behave to have the best chances for recovery. I’m very happy that my partner is still with us and back at the stable. He is such a special part of me and the people around us.” 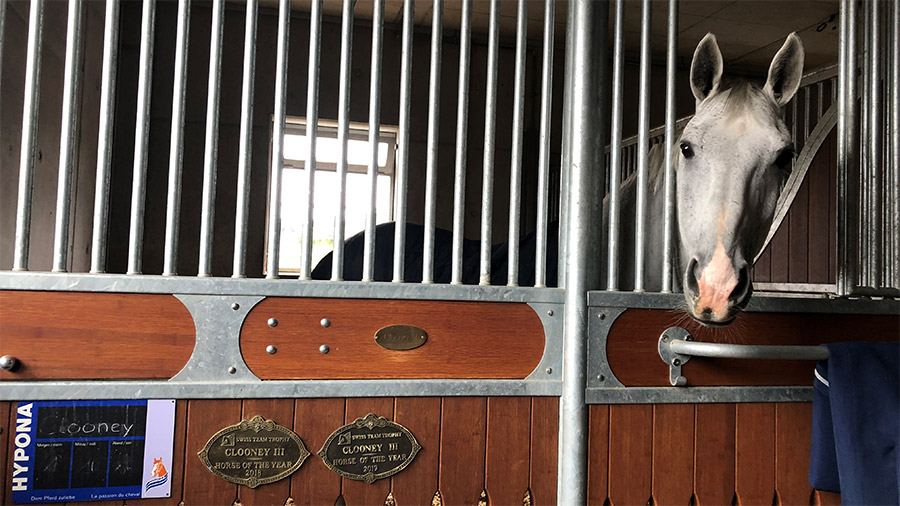 Clooney 51 being back home in his home stable in Wängi TG.
﻿