Putting the pounce back in Pooh 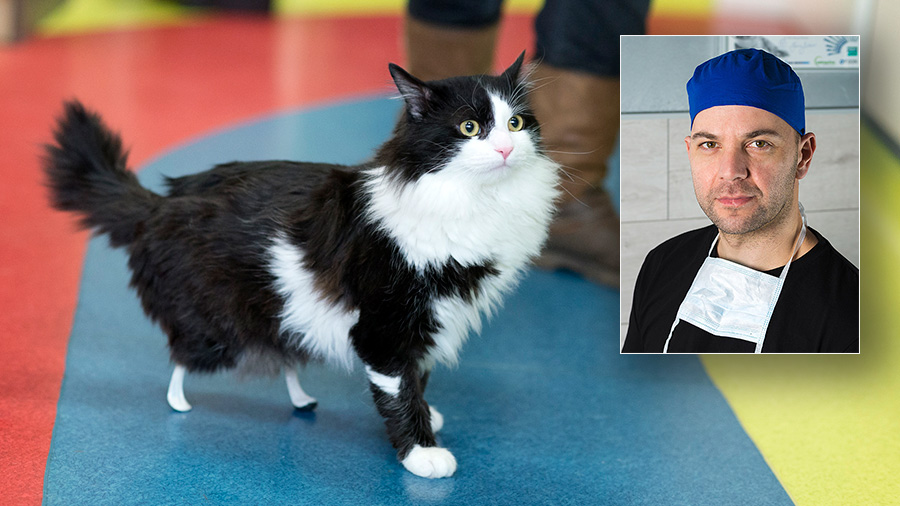 Everyone knows the prevailing narrative: A stray cat sustains a devastating injury and euthanasia appears to be the most compassionate choice. But a cat that lost its back legs in an accident is back to his pouncing best in Bulgaria, thanks to inspiration from the global AO VET community, an active local rescue organization, and the courage of AO VET faculty member Dr Vladislav Zlatinov, who designed and implanted a pair of titanium hind legs and prosthetic feet to restore his mobility. The groundbreaking 2017 surgery was a first not only in Bulgaria, but in continental Europe. 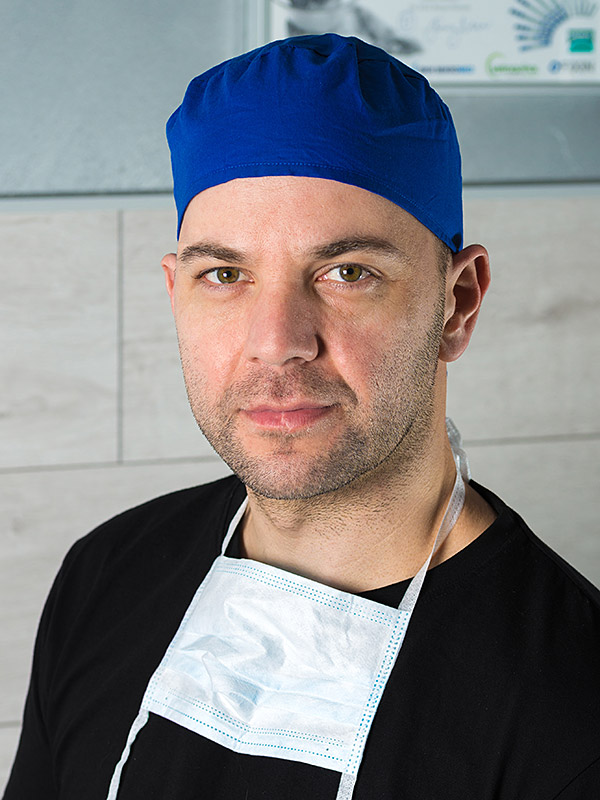 ‘Can you do something for him?’

Pooh was just a few months old in 2016 when he was brought to Zlatinov by the cat lover who had been feeding the stray and found him near the city of Pleven with severe trauma to his hind legs. The 1.5 kg mixed breed kitten had been hit by a car or a train. He had been treated with antibiotics by a local veterinarian, and the woman who found him had received two or three euthanasia recommendations before she turned to Zlatinov.

“He was obviously a fighter, and the woman who had been caring for him asked me, ‘Can you do anything for him?’” said Zlatinov, who practices at Sofia’s Central Veterinary Clinic. “I did some research because I knew there was potential for putting in some integrated prosthetics. This procedure was performed for the first time on a cat by Irish veterinary surgeon Dr Noel Fitzpatrick in 2009, and I was also inspired by AO VET faculty member and veterinary prosthetics pioneer Dr Denis J. Marcellin-Little. But there were many obstacles, especially in an economically developing Eastern European country like Bulgaria. The expense was just one of the issues.”

But Zlatinov was undaunted and with financial support raised by the Sofia-based animal rescue organization, Let’s adopt-Redom, he accepted the challenge.

“We really had nothing to lose,” he said. “This kind of surgery requires ‘a little bit’ of courage, and for that I’m thankful to the AO VET community and all of the AO faculty who gave me the confidence to accept this challenge to help this cat. This is not the kind of surgery we should ordinarily take on without previous orthopedic experience combined with critical innovative thinking. This kind of limb salvage treatment is a becoming more and more evidence-based technique and it can be upgraded successfully in the future.” 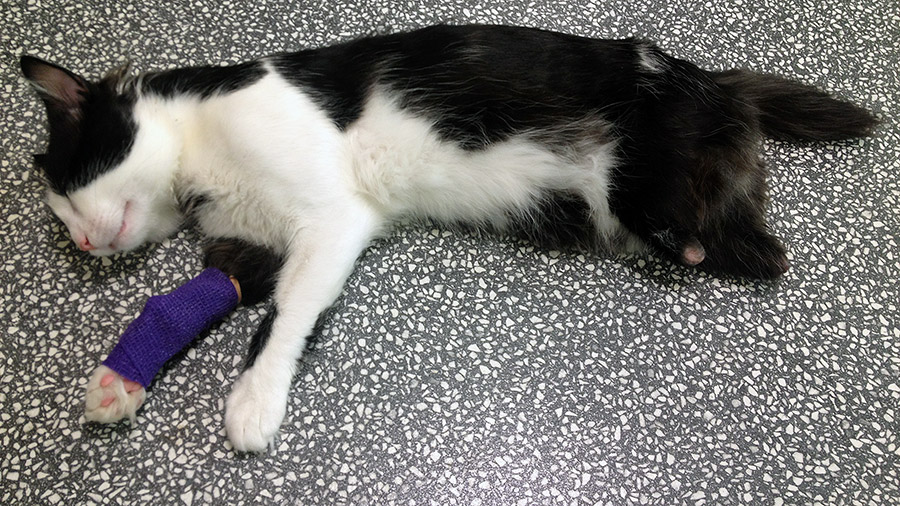 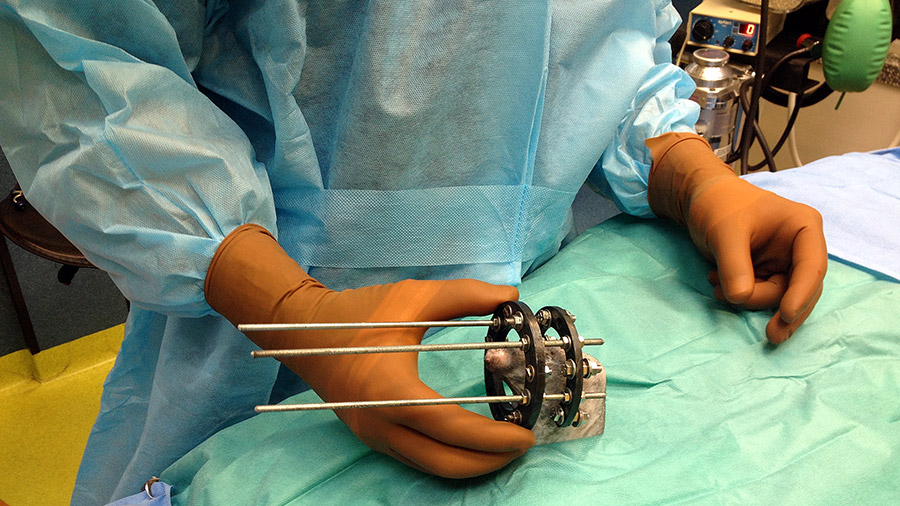 It took three or four months for everything to fall into place: finding the implants and having the prostheses for the feet fabricated locally. In the precise surgery, Zlatinov drilled into what remained of Pooh’s back limbs and implanted in each a titanium peg to which a blade-like prosthetic foot was later attached. After a six-week bone integration period, the patient could officially test his new limbs—and before long, he was grooming them with his tongue just as he would have groomed his natural legs and feet.

“Animals always surprise me with how adaptive they are. They start to walk very quickly if you give them the ability. In fact, they can be too eager to get up and walking,” Zlatinov explained.

The next challenge was finding a “forever home” for Pooh. The rescue organization launched a search with two important caveats: Pooh would require continued medical care and that he should be an indoors-only cat for the rest of his life. The rescue organization’s plea went viral and an overwhelming number of people applied to adopt Pooh, and—bringing a touch of symmetry to Pooh’s story—the woman who had been his caregiver and advocate from the beginning was selected. 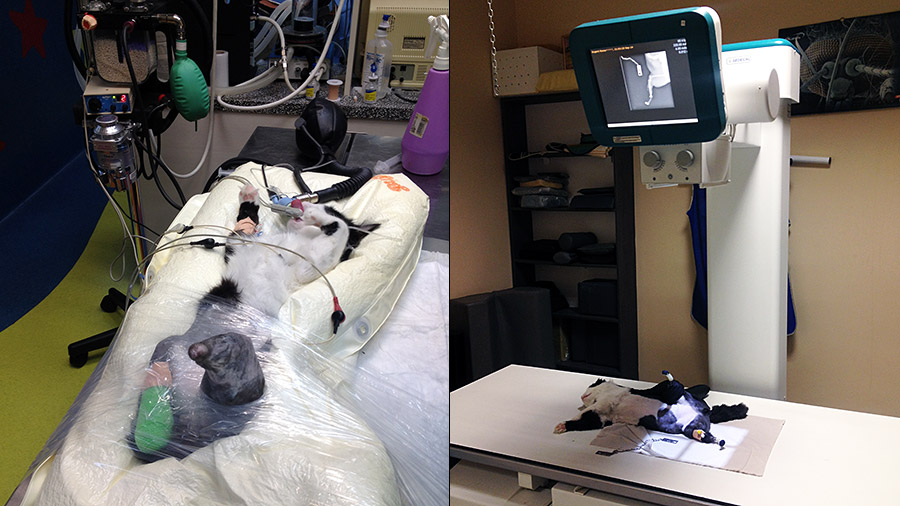 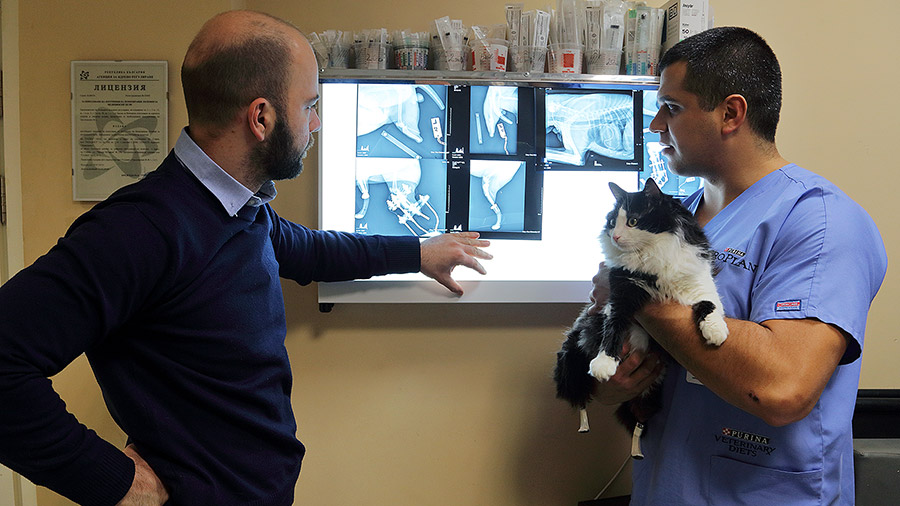 “I occasionally visit Pooh to check on him. He has adapted to this prosthesis 100 percent: He is really like a normal cat. Definitely, he has no pain. In fact, the woman who adopted him has complained that his playful behavior—like jumping from some heights—worries her,” Zlatinov said, laughing. “I have to say, though, that Pooh has gained some weight and today is a little bit fat and not very athletic. He’s a normal cat.”

Zlatinov emphasized that Pooh’s treatment was by no means experimental.

“This is evidence-based veterinary medicine, and at the same time it pushes the limits of our ‘daily routine’ approach to the problem. It’s innovation to ultimately improve many more patients’ lives in the future,” he said. “I am happy to have had a role in Pooh’s recovery, and I’m grateful to the AO VET community for inspiring me, for the trust placed in me, and to the rescue organization for its commitment to giving Pooh another chance.” 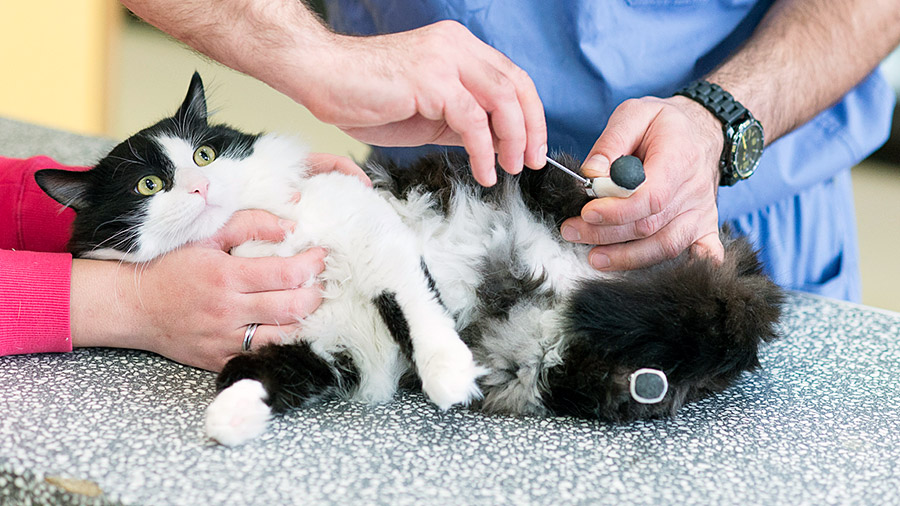 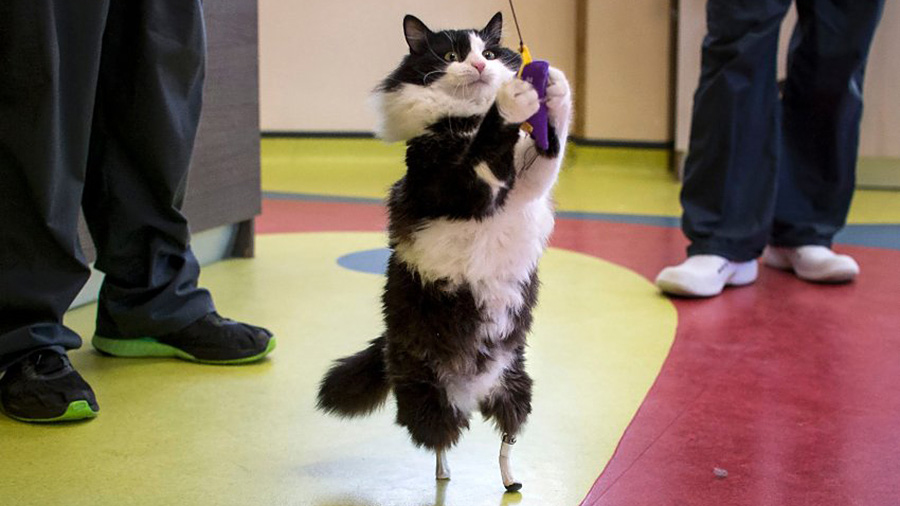