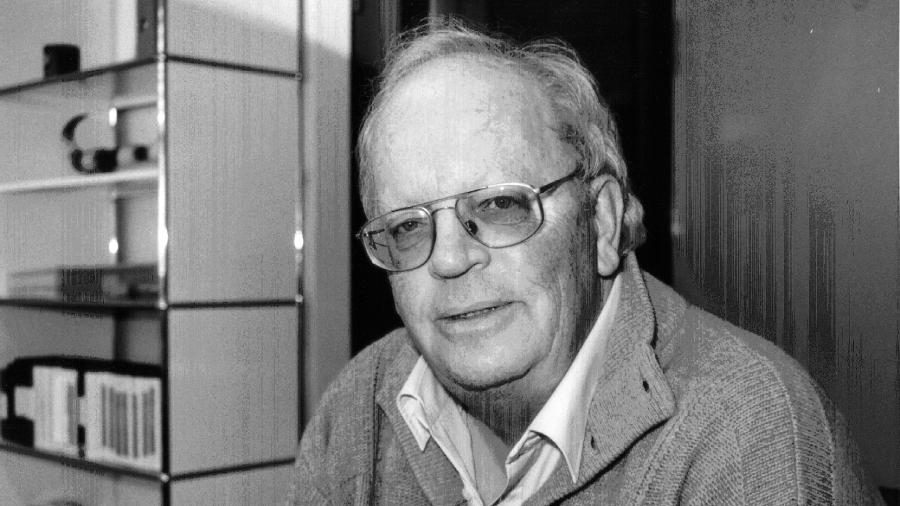 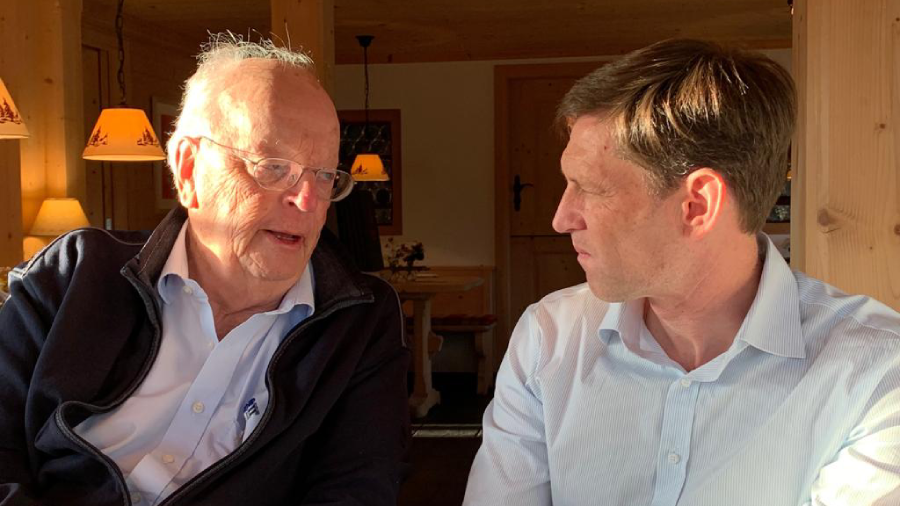 Perren and his protégé Miclau, in June 2019 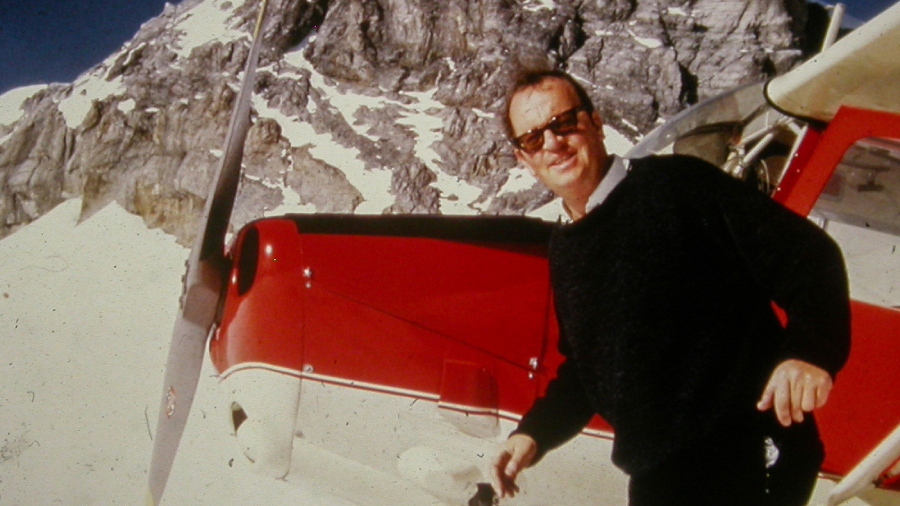 Perren on a glacier inear his hometown n Zermatt

In 1965 Perren took the leadership reins at the Laboratory for Experimental Surgery, today known as ARI, serving as director until 1996. During that time, he moved ARI’s research emphasis toward the mechanobiology of tissue repair, with a focus on the interaction of mechanical and biological influences on bone formation, remodeling, and healing. Under his leadership, important strides were made in internal fracture fixation, including the development of plates with limited and no contact with the underlying bone avoiding contact necrosis and tissue-friendly surgical procedures. After leaving ARI, he continued serving as a senior scientific advisor and active in research at ARI as recently as this week.

“Stephan was a distinguished scientist whose work on bone mechanics and healing is world renowned,” said ARI Director Prof Geoff Richards. “He was the scientific fundament of the AO Foundation's education which has influenced so many surgeons and his science also influenced many scientists in the musculoskeletal field and societies within this broad field. He was a very strong advocate of freedom to explore in research to allow discovery of real novelties that then could be developed and translated.”

In addition to his early role as director of AO, Perren was chair of the AO Technical Commission and Development Steering Committee for 16 years.

Under Stephan’s leadership, the scientific discoveries developed in the ARI were matched by the arrival of new implants. First came the justification for compression plating, followed by the Dynamic Compression Plate (DCP), then the Limited Contact Dynamic Compression Plate (LC-DCP), then the Point Contact Fixator (PC-Fix), and finally the limited invasive stabilization system (LISS). Stephan understood research and researchers; he created an environment which attracted creative minds and allowed them to flourish.

Additionally, Perren founded several well-known international societies, including the European Society of Biomechanics (ESB), where the AO Foundation has sponsored the ESB S.M. Perren Research Award since 2002, and the International Society for Fracture Repair.  He was the recipient of a number of prestigious awards, including the AO Prize (1968), the 1983 Danis Prize presented by the Société International de Chirurgie, the 1993 Johann Friedrich Dieffenbach bust from the Deutsche Gesellschaft für Unfallchirurgie (German Society for Trauma Surgery), the Association Internationale pour l'Ostéosynthèse Dynamique Award 2000 for the 100th birthday of Gerhard Küntscher, the 2001 Orthopedic Research Society Arthur Steindler, MD Award, and—in 2004—the AO Prize for lifetime achievements. 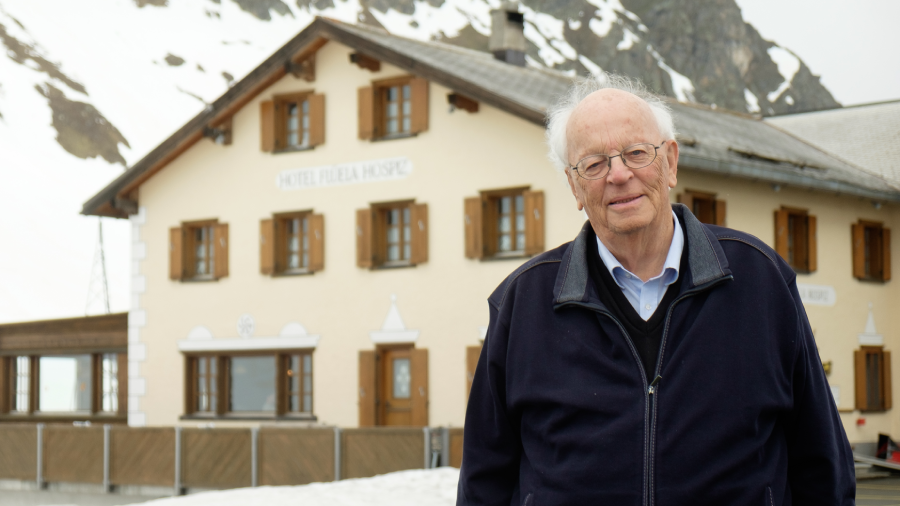 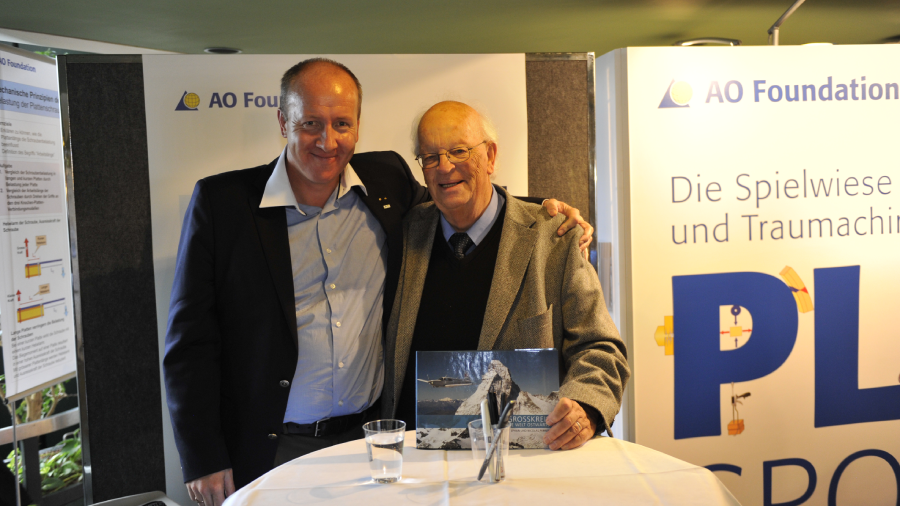 Richards and Perren at DKOU, 2011
Furthermore, the Stephan Perren AO Trauma Research Traveling Fellowship was established in his honor, providing young and enthusiastic researchers with a special interest in trauma care the opportunity to visit ARI and the Julius Wolff Institute for Biomechanics and Musculoskeletal Regeneration in Berlin, Germany, for two weeks each. The fellowship drives forward Perren’s legacy as both a researcher and a mentor to young researchers.

“Under his leadership, ARI evolved to one of the world’s best-known facilities in its field, attracting fellows from all continents,” Rüedi said. “Until his very last days Stephan was still full of ideas in the search for new facts and explanations of the biological and biomechanical secrets of bone healing. Besides his research, he was a great teacher and mentor, an exceptional personality and a wonderful friend. His passing away is an enormous loss for research, the AO community and, of course, for his family and many close friends.”

‘Impossible to measure his influence’ 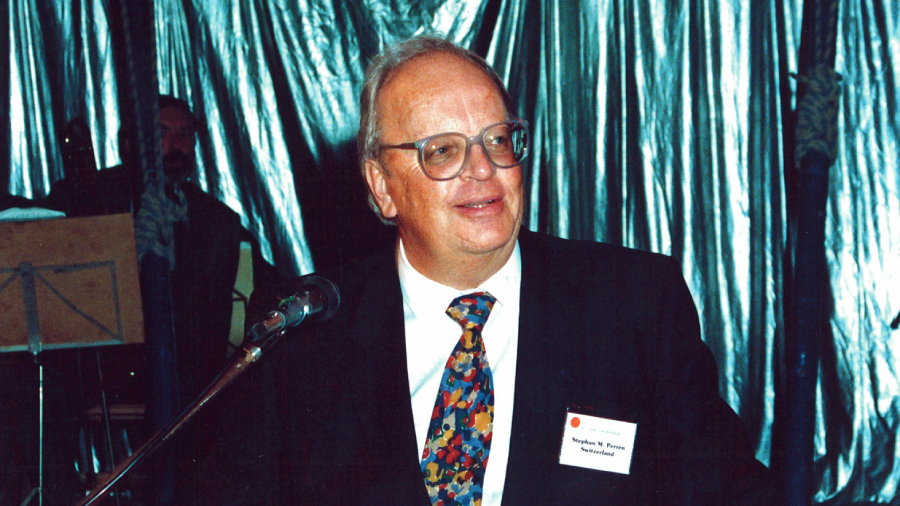 Perren at the inauguration of the new AO Center, 1992 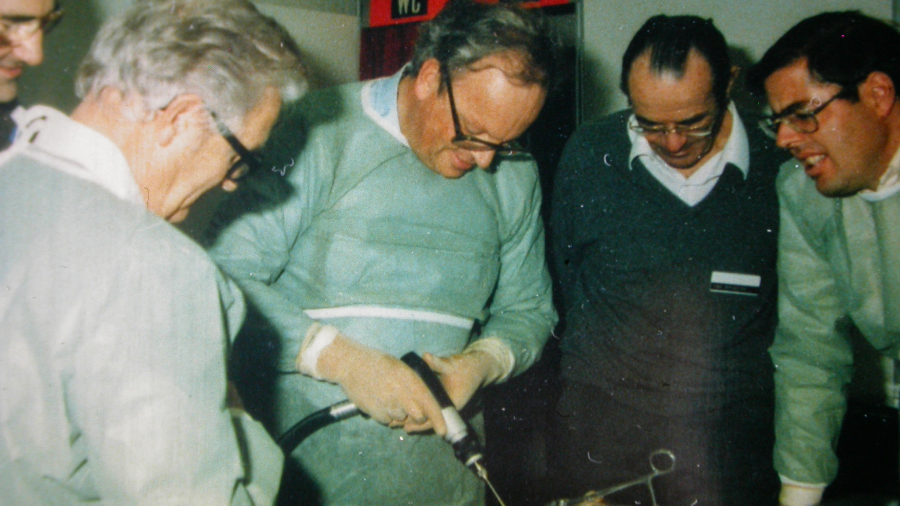 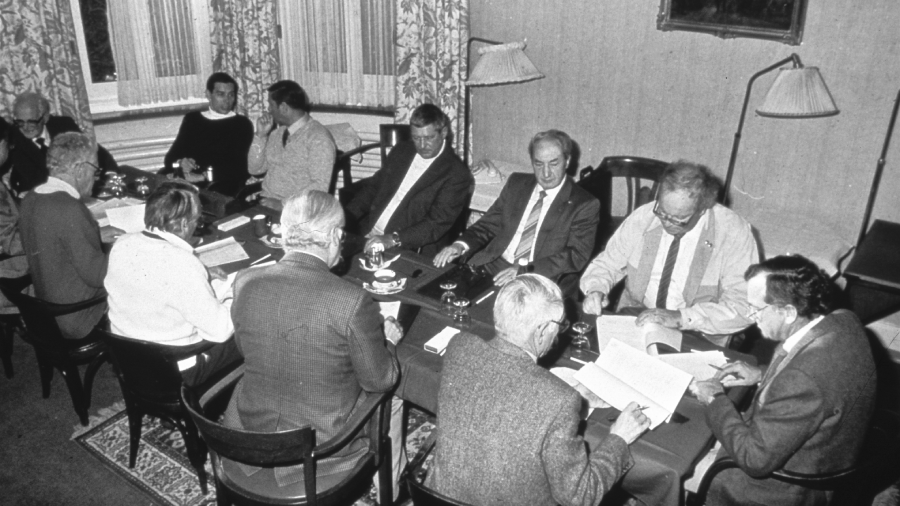 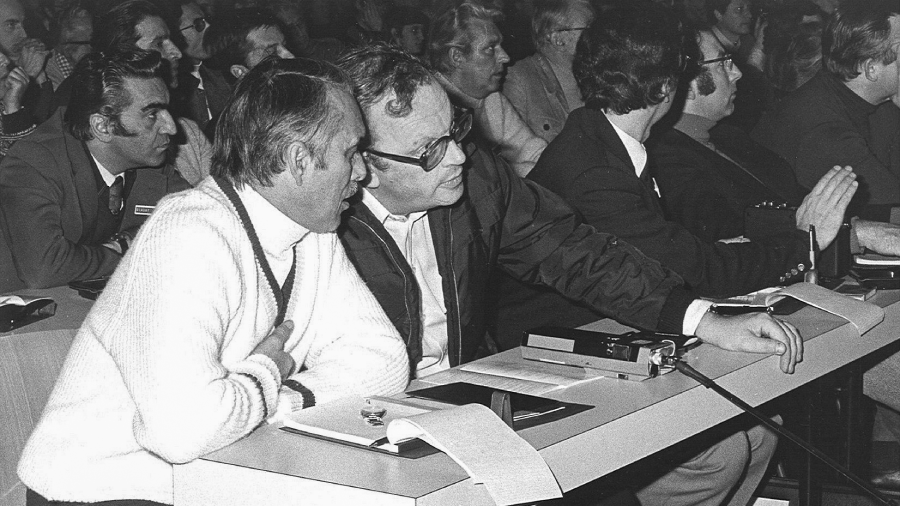 Mueller and Perren during an early AO course


Prof Pietro Regazzoni, an honorary AO Trustee since 1990, described his close friend and colleague Perren as “a pillar of the AO…but above all an extraordinary man.”

“He has been and remains extraordinary, not only because the results of his research are now integral part of the manuals of musculoskeletal surgery,” Regazzoni said. “Founder and research mastermind of our still unique AO Foundation, he is outstanding because of the spectrum of his personality. For a majority of his collaborators, he was not only the director but a kind of paternal figure. His generosity and empathic leadership style were important ingredients. For an impressive number of surgeons, the rigor of scientific thinking was, is and will remain linked to the person of Stephan. 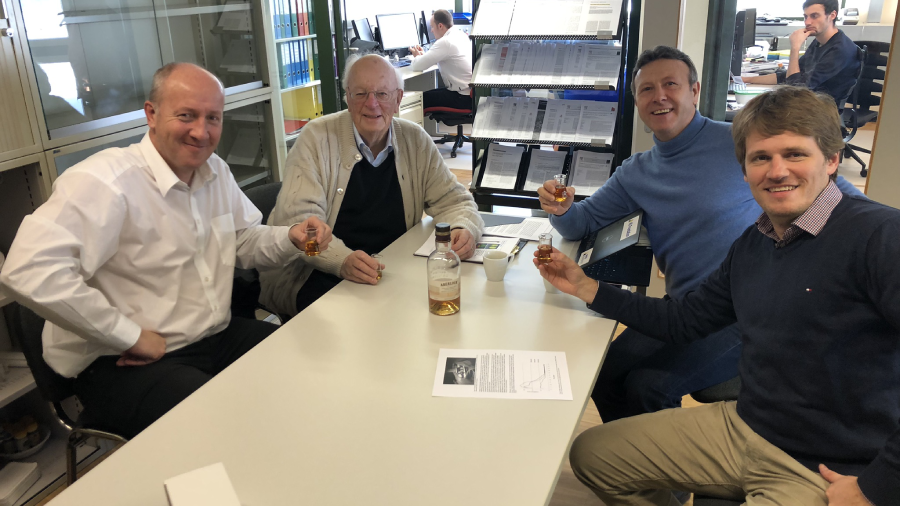 ‘An inspiring teacher and mentor’

“"With Stephan's death, AO lost its scientific backbone and founder,” said AO Past President Chris van der Werken (2006–2008) from the Netherlands, who described Perren as “an inspiring teacher and mentor but above all a warm personal friend…we will all miss him.”

“We were so lucky to have such a great mentor with Stephan," said inventor and former ARI Research Associate (1983–1996) Slobodan Tepic.

“Stephan was a pioneer and a visionary man,” added AO Trauma Europe and Southern Africa Board member Pol M Rommens, who initiated the Stephan Perren AO Trauma Research Traveling Fellowship. “He especially was a worldwide recognized and respected trauma researcher. I am happy and proud that I could start with the AO Trauma research fellowship, which bears his name. This and other initiatives will keep his achievements alive within the AO Trauma world.”

“With the death of Stephan Perren, we have lost one of the great pioneers of the AO. Stephan took over the leadership of the ARI in the late 1960s.

Almost from day he took over, he began to advance our knowledge about the relationship between bone healing and bone surgery,” Schatzker said. “Stephan’s brilliant scientific research explained, step by step, all the mysteries surrounding the surgical manipulation of bone and its biological consequences. Without his research, the AO would not have had the solid scientific foundation that was necessary to refute its many opponents who ridiculed the idea that bone could heal under compression.”

He said each AO clinical advance was matched by an equally brilliant scientific explanation provided by Perren and his colleagues in the ARI working under his leadership.

“He was also a brilliant teacher. During AO courses, we saw him lugging fully stuffed briefcases as he rushed from one lecture theater to another,” said Schatzker. “His teaching was innovative; he enlivened his lectures with many simple teaching aids that he created to explain the concept he was attempting to demonstrate beyond any doubt. He had the gift to make the most complex biomechanical concept simple.”

‘He will be very much missed’

Schatzker described Perren as one of the AO’s most distinguished members—and one who will be profoundly missed.

“Not only a dedicated physician and an enthusiastic researcher, who never retired from working on innovative projects, Stephan was also a courageous pilot with many exploits to his credit. He was devoted to his family and a great friend to many,” he said. “The AO community has lost one of its most distinguished members. He will be very much missed. I have lost a close friend and colleague, whom I admired for the past fifty years.” 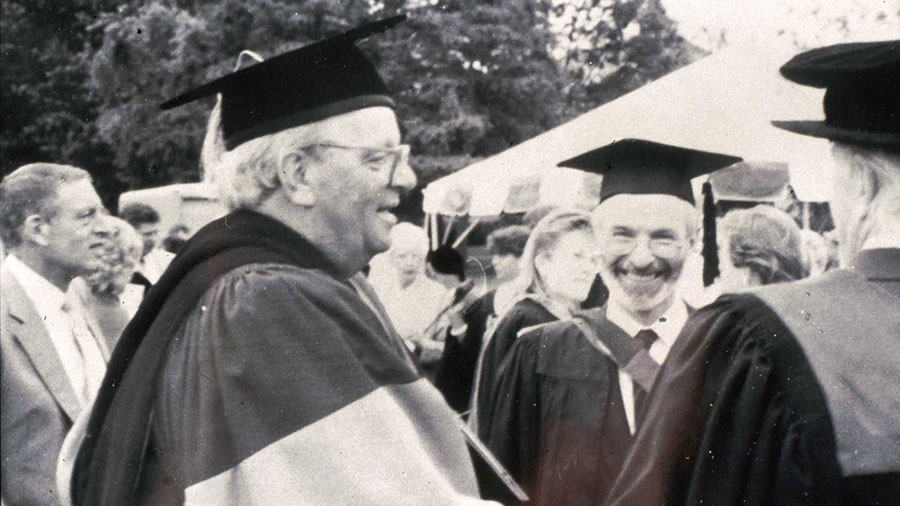 Perren and Schatzker, at the University Quelph, 1987

Perren and retired AO employees at the AO center, 2013
﻿